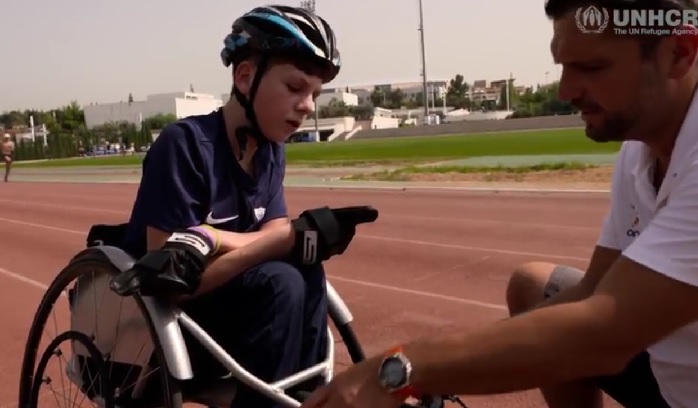 Over the past two years 13-year-old Syrian boy Najib, has been confined to a wheelchair. Coming to terms with his injury as well as his life in exile, had exhausted his confidence in the future.
Now, however, as a refugee in Greece, Najib has made a discovery that is helping him  imagine himself in a new light as a Paralympic athlete.
Two years ago, a bomb attack on his home in the city of Homs in Syria, left the wisp of a boy paralyzed from the waist down. In spite of his injury, Najib and his family made their escape from the armed conflict that was going on around them, and braved the Mediterranean Sea crossing on a rubber dinghy from Turkey to Greece; where they were eventually granted asylum in 2016.
Last November Najib signed up for a pilot Paralympic education project that is managed by the Hellenic Paralympic Committee, the Agitos Foundation and UNHCR.
The project helps to empower refugees with disabilities; particularly the young, by giving them the opportunity to learn sports, train, and even compete at the national Paralympic level.
For Najib, the experience has been transforming, and has given him a reason to strive.
Besides this, it has given him hope that there is something to look forward to in the future.