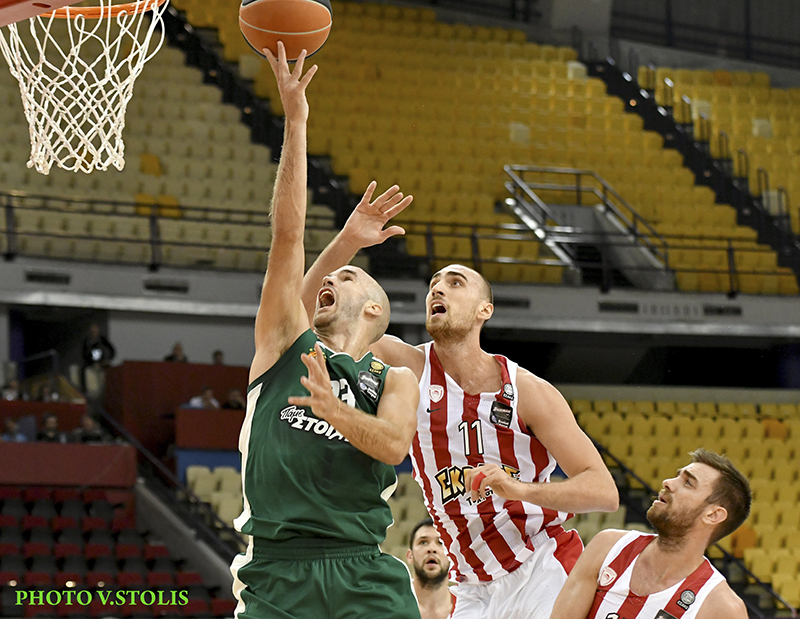 In the opening game for the new basketball season in Greece, the derby between Olympiacos and Panathinaikos in Piraeus ended with the Greens stealing the win (68-71), after a surge in the last five minutes.
The game was held without attending fans, due to Game 5 of last season playoffs riots caused by Olympiacos supporters, after Panathinikos secured the title away in Piraeus.
After a nearly perfect balance in the first half, which sent the teams to the lockers at 40-36. Multiple ties followed in the second half, as no team could grab the initiative of the game.
Olympiacos secured a 9-point edge (65-56) and with six minutes to go, it looked like they had locked the derby win. What they didn’t count on, were 3 consecutive 3-pointers – two by K.C. Rivers and one by Chris Singleton.
They got the Greens ahead by one (66-67) and a crucial steal, followed by an extraordinary assist (to James Gist) by Nick Calathes, gave Panathinaikos a three point lead. Olympiacos scored two free throws, but Gist answered with free throws of his own – and that was enough.
With a 5-14 partial score in the last five and a half minutes, Panathinaikos came out victorious in the first season derby – just like they did in last season playoffs’ Game 5, which crowned them champions.
Point guard Nick Calathes was the leading scorer for the Greens with 14 points and the undisputed MVP of the game. KC Rivers, who changed the route of the game followed with 13, same as James Gist.