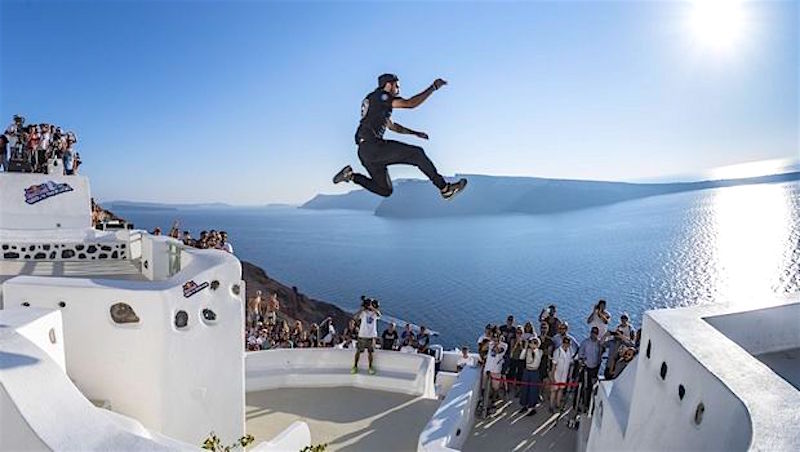 This year world-famous free runners turned the white traditional Santorini houses into their playground. Free runners from all over the world took spectacular jumps against the backdrop of the volcanic caldera. They joined together in the seventh consecutive year of Red Bull’s Art of Motion Parkour and Free Running Games in Oia, Santorini.

The Ukrainian qualifier beat the world’s best free runners to take a career-defining win in Greece.
Unknown Ukrainian qualifier Alexander Titarenko went from zero to hero as he defeated the world’s best free runners to take a career-defining victory at Red Bull Art of Motion 2017 with the highest score in the competition’s history.
Shocking the free running establishment, Titarenko served notice that he was a serious contender after wowing the judges and his fellow competitors during the on site qualifier. He held that winning form through to the all important finals on the classic whitewashed walls, where he dominated with massive moves, flawless flow and confident exuberance.
Delivering a flawless final run, Titarenko set a new all-time Art of Motion high score of 415 points, comfortably beating American Nate Weston and local greek hero and former champion Dimitris ‘DK’ Kyrsanidis.
Red Bull Art of Motion 2017 results:
Alexander Titarenko (UKR) 415 points
Nathan Watson (USA) 386
Dimitris Kyrsanidis (GRE) 384
Calen Chan (USA) 346
Pedro Salgado (POR) 330
Valtteri Aho (FIN) 309
A total of 187 athletes participated.
Parkour or “The Art of Flying,” as described by the people who live the parkour life, is a non-competitive physical and spiritual art whose aim is the rapid, safe and optimal way to move from one place to another in the environment, using only human abilities. Its name originates from the French term for a military obstacle course – “parcours du combattant” – while it’s the number one sport on YouTube with more than 20 million uploads.
In 2015 Santorini acquired its own free Running school. More than 600 athletes from 55 countries have so far taken part in the Red Bull Art of Motion in Santorini.