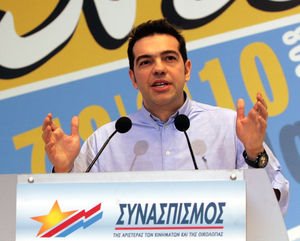 The prime ministers of Bulgaria, Greece, and Romania have expressed their support for Serbia’s bid to join them in the European Union, saying the move would help guarantee regional peace and security.

“All of us know that the natural place of Serbia is in the European Union,” Bulgarian Prime Minister Boyko Borissov told reporters after a summit on October 3, in the Black Sea city of Varna.

Serbia deserved to go quickly to enter the EU, Tsipras echoed, adding that the four countries, three of which are already members of the EU, can play a significant role in the development of the region.

According to Tsipras, the cooperation of the four countries in energy, transport, crisis management and security had a great potential.

Borissov said the three Balkan members will work to speed the process of Serbia’s EU entry into the political and economic bloc, which currently has 28 members.

Serbia along with Montenegro are the Western Balkan countries closest to joining the EU, having initiated accession talks with Brussels in 2014.

Serbian leader Vucic; a former nationalist, has remade himself as a pro-European Union reformer while at the same time seeking to maintain good relations with traditional ally Russia.

Despite the hopes of EU membership, Vucic on October 3 accused the bloc of having a double standard by refusing to accept this week’s Catalan independence referendum while having previously agreed to an independent Kosovo, which split from Serbia in 2008.

“We support Spain. It is our friendly country,” Vucic said. “But the European Commission responded in a different way [regarding Kosovo] and it was against my people and my state.”

Brussels has said that Serbia must normalize relations with Pristina, and end efforts to block Kosovo from joining international organizations. Belgrade has said it hopes to join the EU by 2019.