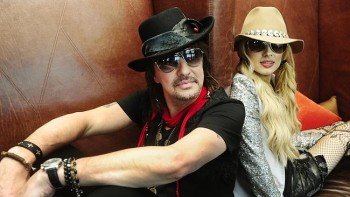 The duo has been touring together as part of a new musical project called RSO. Though they have been linked romantically for some time, this is their first long-term collaborative artistic venture together.

The initial EP contains five lively rock and roll songs; both Orianthi and Sambora rose to fame and honed their skills playing in famous rock bands like Bon Jovi and Alice Cooper, so it’s no surprise they stick with their strengths in their debut album.

Fans who only know the two from their guitar playing in previous bands may be surprised by the excellent vocals on the album, but those who have heard Orianthi’s solo albums already knew the guitarist had an impressive set of pipes.

Though the two have not yet started on a follow-up album, they promise that another will be on the way soon. After the great response to the songs on “Rise”, from the melodic ballad “Truth” to the more classic rock & roll title song “Rise”, their fans will certainly be waiting for more.

Turkey Eyes Russian Jets if US Turns Down F-16 Request