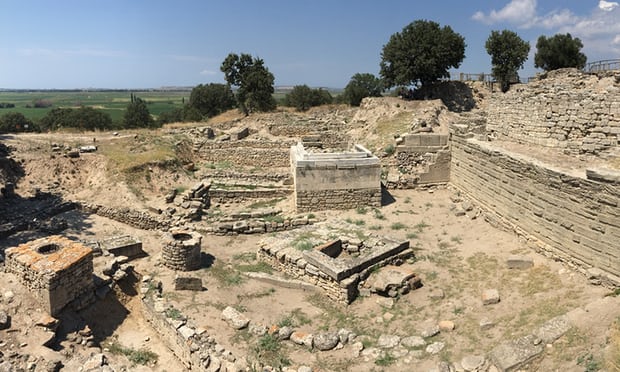 The ruins that are believed to be the site where Troy was standing, are half an hour’s drive from Çanakkale in north-west Turkey, situated on the Dardanelles strait and near the Gallipoli peninsula.  The ruins of ten “Troys” – Troy I to X – have been found on Hisarlık Hill, dating from as early as 3,000 BC.

Turkey is making an effort to promote the archaeological site and has declared 2018 ‘Year of Troy’.

According to a Guardian report, for the past two years, Turkish archaeologists have been concentrating on the area directly across from Troy VI’s southern gate, dated to 1300 BC, and the main entry into the ancient citadel from the plains below.  They have uncovered a late bronze age road and the remains of a house from the era, indicating the existence of buildings beyond the city walls.

Archaeologists believe Homer’s epic, ‘The Iliad’, has a historical core that can be uncovered through excavations, a careful reading of the literature, and written documents from the Hittite empire that co-existed with Troy and collapsed with the end of the bronze age, the Guardian report says.

The site was first posited as the possible scene of the war depicted in The Iliad as early as the second half of the 19th century, when excavations, first by the British consul Frank Calvert and then by a German merchant, Heinrich Schliemann, began.

Turkey hopes the site will draw more tourists to the area, one of the most important historical ruins of antiquity.  The country’s culture ministry has declared 2018 the Year of Troy, and is planning several events to promote the site.

A museum to exhibit the findings from the excavations in the area will open next year.  The Turkish government is in talks with museums around the world that possess artifacts from Troy to bring them back to Turkey.  The most famous is the so-called Priam’s Treasure, a collection of gold, weapons, artifacts, goblets and diadems smuggled out by Schliemann to Berlin, and then taken to Moscow after World War II, where they remain in the Pushkin Museum.