GRNews
GreekReporter.comGreeceClashes Erupt Between Demonstrators and Police on Anniversary of Fyssas' Murder

Clashes Erupt Between Demonstrators and Police on Anniversary of Fyssas' Murder

A protest march marking the fourth anniversary since the murder of rapper Pavlos Fyssas descended into chaos on Monday as protestors and police clashed in the Piraeus suburb of Keratsini.
Riot police used tear gas to disperse a group of demonstrators who threw stones at the entrance of the mayor’s office in the centre of Keratsini where Fyssas was murdered by members of the far-right party Golden Dawn. 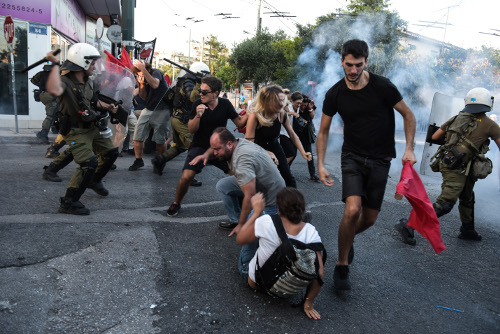 The musician’s family and anti-racist groups, gathered at the spot where Fyssas was killed, and then marched through the neighbourhoods of Keratsini and Drapetsona to reach Kastraki, at the port of Piraeus, for a tribute concert.
“Our goal is that [this event] should serve as a rallying call for action as the Golden Dawn trial enters into the final stretch. We need active support and a mass turnout at court sessions, in order to make it clear that there is no other option but the complete condemnation of fascists,” the family said in a statement.
Giorgos Roupakias who confessed to the murder of Fyssas, has been released from prison with restrictions being put on his whereabouts.
Statements of support were also issued by the mayors of Keratsini-Drapetsona and Korydallos, while the ruling SYRIZA party issued an announcement stressing that society demands an immediate conclusion of the trial of Golden Dawn, without further delays and foot-dragging.