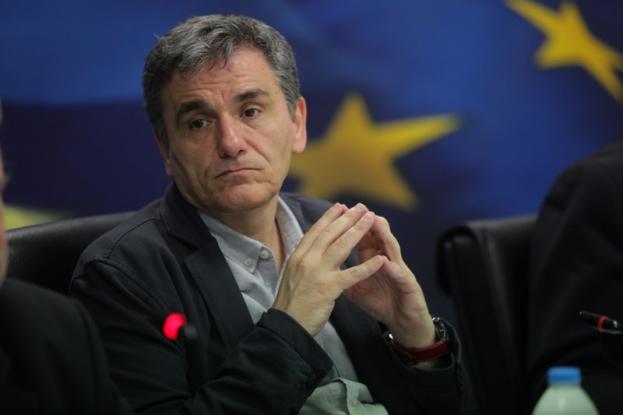 Greece and its creditors believe that the country will not need a precautionary credit line after its aid program is completed in August 2018, Finance Minister Euclid Tsakalotos said on Friday after a meeting of euro zone ministers in Tallinn, Estonia.
“It is pretty clear that the Greek government, the European institutions and the IMF are not thinking of a precautionary credit line,” he told journalists. “There is no reason for such a credit line. In reality, the Eurogroup’s decision in June clearly states that money must be collected for state arrears and for a buffer of funds so that Greeks can have a ‘clean’ exit,” he added.
Future plans
Tsakalotos said that after the third program review and at the start of 2018 there will be a discussion with the institutions on the nature of Greece’s exit from the program. Between February and May there will be talks on the country’s debt and remaining issues concerning the program.
Asked whether Greece expects to receive before the end of the program the 26 billion euros that remain from the 86-billion-euro loan it received from the European Stability Mechanism (ESM), the minister said it will probably not be spent and its use will be part of the debate on how Greece will exit the program. Part of the amount will be used to pay for state arrears and create the buffer.
He said he was also confident Greece will achieve the primary surplus target of 3.5 percent of GDP in 2018 and that no new measures will be required, as the over-performance and under-performance in the various budget areas will cancel each other out.
“I am very certain that we will not need new measures in 2018,” he said.
IMF and Eurogroup concerns
Concerning the IMF’s request to conduct an asset quality review (AQR) at Greek banks before the end of the program, he said that Greek lenders are part of the European system and that European authorities such as the European Central Bank and the Single Supervisory Mechanism have not requested this action. Tsakalotos said that European banks will also be submitted to stress tests in 2018 and expressed confidence that the position of Greek lenders will have significantly improved next year.
The minister said the Eurogroup expressed concern on the introduction of electronic auctions which has been delayed more than other measures on how to tackle non-performing loans.
The Eurogroup also raised the issue of the legal problems former ELSTAT chief Andreas Georgiou has faced, Tsakalotos said, adding that he told them his only conviction concerned a “procedural issue on whether he convened the or not board.”
(Source: AMNA)