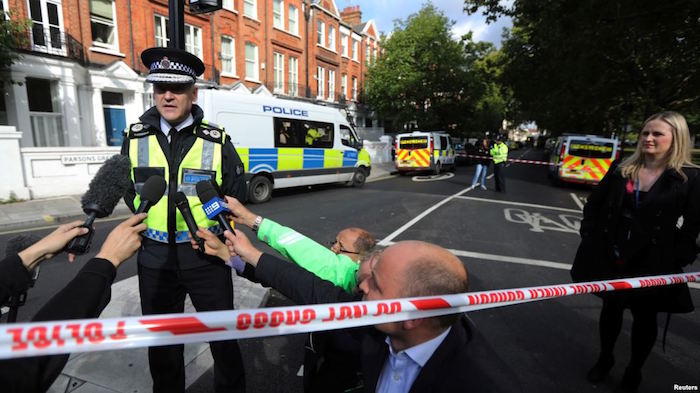 Police in London are urgently trying to establish who was behind a terror attack on the city’s underground rail network during the Friday morning commute.

The explosion happened during the capital’s morning peak rush hour on a London Underground District Line train at Parsons Green in the west of the city.

“There was a loud shriek to my left, and I turned and there were the remnants of a flash and smoke. And then just hordes of people, the stampede had already started,” recalled commuter Luke Walmsley, who was close to the explosion.

Images posted on social media appear to show a bucket on fire that had been placed inside a plastic bag close to a carriage door.

Police soon declared it a terrorist incident – and a large cordon has been put up around the area, with parts of the metro network suspended.

“We now assess that this was a detonation of an improvised explosive device,” Mark Rowley, Deputy Assistant Commissioner of London’s Metropolitan Police told reporters.

Investigators are urgently going through security cameras and combing the scene for evidence to try to establish who was behind the attack – and where they are now.

The Mayor of London Sadiq Khan released a statement saying ‘we will never be intimidated or defeated by terrorism.”

London has been hit by a series of terror attacks this year, all striking so-called soft targets like transport hubs and pedestrian walkways.
(Source: VOA)