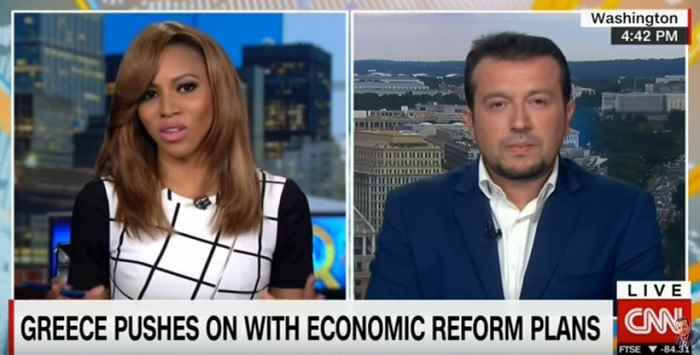 Greece will exit from the supervision of its creditors and manage to stand on her own two feet by August 2018, said Nikos Pappas, minister of Digital Telecommunications and Information Policy.
Speaking from Washington DC to CNN on Thursday, Pappas, who is also a close aide to PM Alexis Tsipras, said that the government will succeed in exiting to the markets in the summer of 2018.
Painting his own version of a Greek success story, Pappas said that the Greek economy is improving, unemployment is dropping and exports and investments are increasing.
Replying to a question on the ‘brain drain’ and what could the government do to attract back to Greece the young people who have gone abroad, the minister stressed the vital role the EU can play.
The Greek government is pressing the EU to allocate more of its structural funds to support the creation of start-up companies, so that young people can come back and start their own business in Greece, Pappas said.