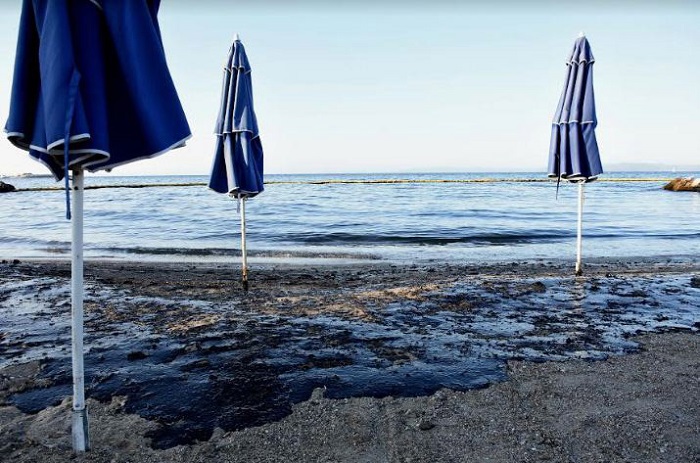 On Thursday, the Minister of Shipping, Panagiotis Kouroumblis, said that he has offered his resignation to PM Alexis Tsipras, following the oil spill that coated many beaches around Saronikos Gulf, south of Athens.
The spillage was caused by the sinking of a small tanker carrying more than 2,500 tons of fuel on Sunday.

Kouroumblis was inspecting the affected areas when he was asked about the alleged late and ineffective response of the Greek authorities to the spillage.
He said that the situation is improving, adding that up to 25 days from now, the situation on the beaches will have returned to normal.  He also added, “A huge cleaning-up effort is under way and that three specialized companies have been contracted to deal with the spillage”.
However, he revealed, that he has offered his resignation to the PM. “I always put myself at the disposal of the Prime Minister,” he said.
Meanwhile, experts warn that it could take years to reverse the environmental damage in the coastal areas of Saronikos Gulf.
Professor of Environmental Studies at the National Technical University of Athens, Kimon Chatzibiros, said residential coastal areas will suffer chronic pollution, which could have been avoided if the spillage was tackled early.
“Even if the oil spill is cleared, the ecosystem will suffer for many years to come”, said Chatzibiros, in an interview with Proto Thema.
Chatzibiros also added, “It takes between five to ten years for nature to fight pollution, and to eliminate the consequences of the oil spill. For about five years there will be a disruption of the marine ecosystem”.