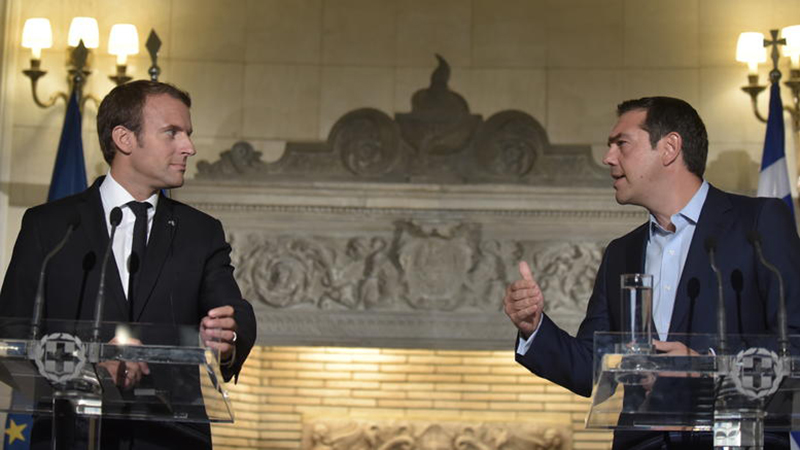 In a joint press conference with the Greek prime minister, French President Emmanuel Macron praised the Greek government’s efforts to overcome the current economic crisis and stressed the importance of structural reforms.
During the short press conference, the French president had flattering words to say about Alexis Tsipras’ initiatives to resolve the economic crisis and agreed with most of the PM’s ideas about a more representative EU.
The French president did not fail to stress the crucial need for continuous and deeper structural reforms in the Greek economy, promising a plethora of French investments in energy, digital technology and transportation.
“The IMF’s role in the end of these talks must be in good faith and without adding further conditionality,” Macron told journalists when asked about the future of the Greek bailout programme.
“We should not exhaust our ministers and officials with nights and weeks of talks about the (Greek) growth rate over the next 20-25 years down to the decimal point,” he added.
Tsipras stressed his determination that the country will exit the bailout programme next summer. “We are absolutely ready and determined to move in this direction and I‘m certain our lenders have the same approach of avoiding hurdles and delays,” he said.
“It is important not only for Greece, it is important for Europe,” Tsipras added. “The final end of the Greek crisis will signal Europe’s passage into a new era of less uncertainty.”
During his meeting with Greek president Prokopis Pavlopoulos, Macron lashed out against the participation of the IMF in rescuing European economies and once again asked for the creation of a European Monetary Fund.
Macron praised Greece‘s austerity reforms but said ordinary Greeks had paid a heavy price and reiterated his call for an easing of the country’s debt burden.
Greek President Prokopis Pavlopoulos said Greece supported France’s proposals for a tighter euro zone. He said the ESM should be reformed and replace the International Monetary Fund (IMF) in Europe.
“We respect the IMF, but we can manage better with an organization which was set up to have a European mentality and understand the euro zone’s special features,” Pavlopoulos told Macron.
Later in the evening the French president and the Greek PM will make a historic address on the future of Europe from the ancient Pnyx hill, a public square where Greek and international prominent figures have offered addresses about democracy and philosophy over the past 2,500 years.