GRNews
GreekReporter.comGreeceDefeat by Belgium Sends Greece Down to Third in World Cup Qualifiers... 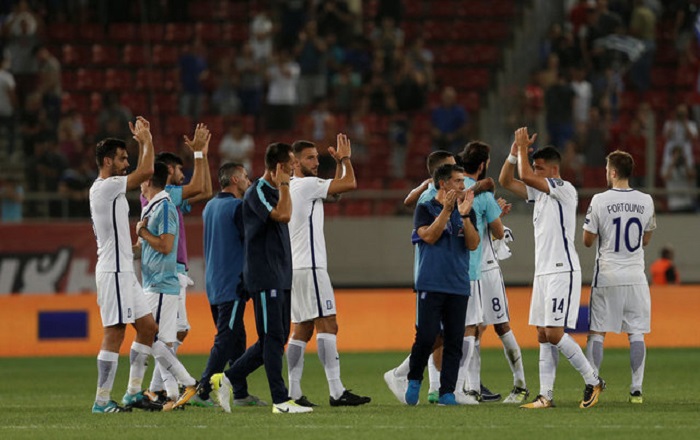 Belgium beat Greece 2-1 at Giorgios Karaiskakis stadium on Sunday evening to secure its place in the 2018 World Cup with two games left.
Greece has lost the upper hand in securing the second place of the group which leads to play offs among the best eight runners-up.
Greece managed to stifle Belgium with a five-man defence in the first half and twice came close to scoring on the break.
Anastasios Donis surged forward from midfield and tested Thibaut Courtois, then Konstantinos Stafylidis produced a thumping drive which was heading for the top corner until the goalkeeper tipped it away.
Defender Jan Vertonghen gave Belgium the lead in the 70th minute with a left-foot drive into the bottom corner.
Belgium’s celebrations were cut short three minutes later when Greece’s Portugal-born Zeca side-footed home to equalise after Georgios Tzavelas sent over a pinpoint cross.
But one minute after that, Lukaku headed into the far corner after being picked out by Thomas Meunier.
Greece dropped to third with 13 points after managing only one point from two home games in the space of four days.
Bosnia, beaten 3-2 away to Cyprus after squandering a two-goal lead on Thursday, took full advantage of the Greek defeat to reclaim second spot, with Edin Dzeko scoring twice against Gibraltar.
Cyprus’s outside hopes of making the playoffs suffered a setback when they lost 1-0 to Estonia where Mattias Kaeit scored in the final minute. Cyprus are fourth with 10 points followed by Estonia on eight.
Standings: Group H
Belgium 22 points
Bosnia 14
Greece 13
Cyprus 10
Estonia 8
Gibraltar 0