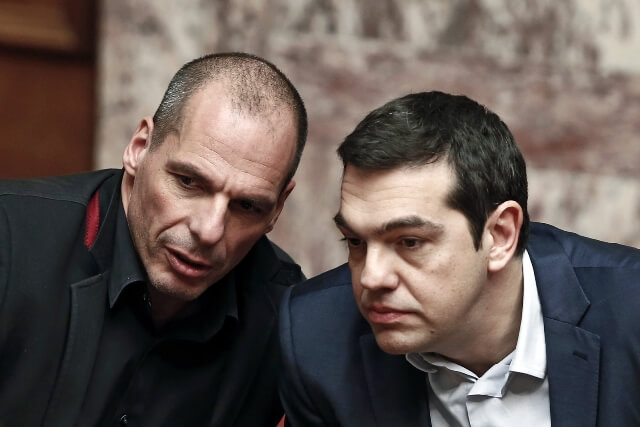 Britain must avoid repeating the mistakes made by Greece and Yanis Varoufakis in negotiations with the European Union regarding the Brexit, a Wall Street Journal report says.
Writer of the report Simon Nixon says that Varoufakis’ book “Adults in the Room” is a best seller among British politicians who seek inspiration on how to deal with the EU in the Brexit negotiations. However, he advises the British government to prepare public opinion for inevitable trade-offs and costs for leaving the EU and avoid the brinkmanship exhibited by Greece’s finance minister in the first six months of 2015.
For Nixon, Varoufakis is admired in the U.K. by leftists who view him as an antiausterity guerilla, and those of the euroskeptic right see him as the man who will destroy the common currency bloc.
Yet, Nixon writes, for many Greeks and Europeans Varoufakis is responsible for Greece losing billions of euros after the unsuccessful negotiations with international creditors in the naive belief of the Greek populist government that European finance ministers will forgive the country’s debts in fear of a Grexit that would rock the euro zone. In the end it was Athens that capitulated signing a deal that was on the table all along, damaging the country’s economy more.
According to Nixon, British Prime Minister Theresa May and Brexit minister David Davis prepare proposals of the “have-your-cake-and-eat-it” type, much like Athens did in early 2015.
One of the proposals cited is that Britain can somehow leave the EU’s customs union but retain its benefits by attaching tracking devices to all imports to establish whether they are entering the domestic or EU supply chain so that they can be taxed accordingly. Nixon says that this is equivalent of Varoufakis’ suggestion that one of the tools to battle tax evasion was to arm tourists with cameras to catch VAT cheats, which damaged his credibility with Greece’s creditors.
Another mistake the British government appears intent on doing influenced by the former Greek finance minister is that Varoufakis and his Prime Minister Alexis Tsipras wasted six months trying to bypass Brussels to negotiate directly with Berlin and Paris when the greatest pressure for a deal was actually coming from the European Commission itself.
Similarly, today, Nixon continues, the British prime minister and the Brexit minister seem intent to seek political deals with national leaders, just like Tsipras and Varoufakis did two and a half years ago. But the EU won’t budge because it is prepared to handle a Grexit or a Brexit now. The writer argues that EU draws its legitimacy from the rule of law: giving the U.K. a cake-and-eat-it Brexit deal would undermine the legitimacy of the EU as budging to Greece two years ago would have destroyed the euro.
The writer concludes that the U.K. can learn from the Greek crisis and make a sober assessment of where the negotiation is likely to end up and prepare the British public opinion for the inevitable compromises and costs. And most of all avoid Varoufakis’ mistakes.