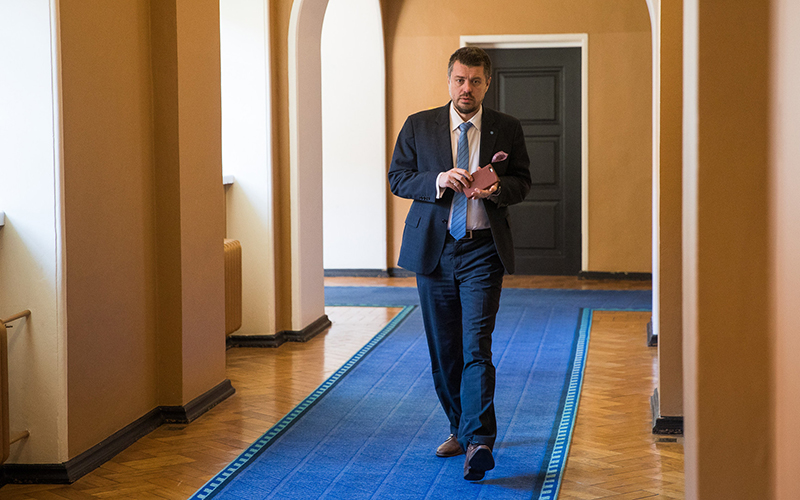 Estonian minister of Justice Urmas Reinsalu, as promised, responded in writing to Greek Justice minister Stavros Kontonis’ reasoning for refusing to attend a Tullinn conference on crimes committed by communist regimes.
Reinsalu expressed regret in Greek Justice minister Stavros Kontonis’ decision to not participate in the conference, and also thanked his colleague for explaining his decision in detail, though he disagreed with Kontonis’ arguments.
The detailed discussion of the history of 20th century Europe was the domain of historians, social and political scientists, and philosophers, Reinsalu said.
“We are politicians, and our job is to protect values and virtues. Our values are human rights, democracy, and a state based on the rule of law, to which I see no alternative. This is why I am against any kind of ideology and political movement resulting from it that denies these values, or that tramples on them after gaining power,” Reinsalu wrote.
In that regard, there was no difference between national socialism, fascism, and communism. All these ideologies had seen it as their right to wipe out whole nations and social classes in the name of their “mad vision of the future”, and had declared others inferior and unfitting for the utopian future they envisioned, he added.
“For what reason they had to be either re-educated, forced to struggle without hope of a better future, or even relocated to uninhabitable wastelands,” Reinsalu wrote.
Reinsalu said that the condemnation of crimes against humanity had be particularly important to the minister of justice. “We are obligated to do this regardless of what the aims of the crimes committed were, and regardless of who the victims of those crimes were,” the minister wrote.
Reinsalu also stressed that the fates of Estonia and Greece in the 20th century were different. “Unlike Greece, Estonia has the experience of two occupations and living under the power of two totalitarian dictatorships. The Soviet Union occupied Estonia in 1940, while National Socialists arrived here in 1941, and the communist occupation continued in 1944,” he wrote.
“In light of the experience of my country and my people, I will contest your argument that there is something good to communism,” Reinsalu said. He admitted that the Soviet Union had played a key role in the demolition of Nazi Germany, but pointed out that the Red Army hadn’t freed Eastern Europe with the aim that the countries and peoples previously occupied by the nazis could decide their own future.
“In freedom and democracy everybody has the right to religious and ideological views that do not call for the eradication of other people or overthrowing the existing government using violence. Our relationship with innocent victims is different. The victims do not care if they were murdered in the name of a better future for the Aryan race, or because they belonged in a social class that had no place in communism,” Reinsalu said.
“We must commemorate all victims of totalitarian and authoritarian dictatorships, with the European Parliament’s resolution on European conscience and totalitarianism approved on Apr. 2, 2009 calling for this to be done, based on which we also commemorated the victims of totalitarian and authoritarian regimes in Tallinn this year,” he added.
Kontonis’ reasoning for refusing his participation to the conference has caused a huge, mostly ideological backlash by all opposition parties, with the exception of the Greek Communist party.