GRNews
GreekReporter.comGreek NewsEconomyGerman FinMin: Greek Debt Relief Not on the Agenda for Now

German FinMin: Greek Debt Relief Not on the Agenda for Now 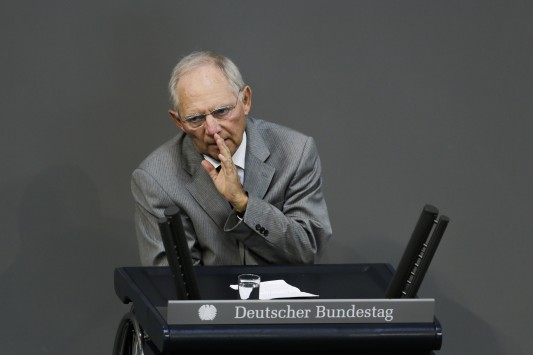 Greek debt relief is not on the agenda for now, and Greece must press ahead with implementing reforms in order to become more competitive, German Finance Minister Wolfgang Schaeuble said.
Schaeuble spoke to German newspaper Mannheimer Morgen. When asked if he sees a debt cut for Greece, he replied, “That’s currently not on the agenda at all.” He added that discussing debt relief measures now that the Greek economy is shaping up, might send the wrong message to Athens.
“The country doesn’t need a debt cut now, but it must continually work on its competitiveness,” Schaeuble said, adding that Greece can borrow at low cost for the next 10 to 15 years.
The German finance minister has often repeated his position that structural reforms should be the priority for Greece, rather than debt relief. Schaeuble and Chancellor Angela Merkel avoid mentioning debt relief for Greece – a controversial issue in Germany – at least before the upcoming German federal elections on September 24.
Merkel’s conservative Christian Democrats are ahead of the Social Democrats by about 15 percentage points in opinion polls and are the favorites to form a new government after the election.