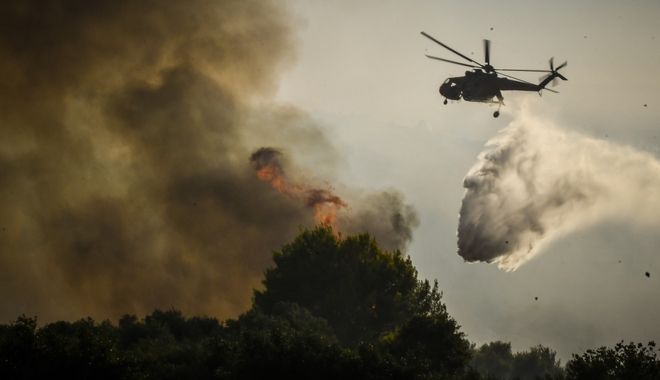 A fire that broke out on Sunday afternoon in the Ilia prefecture in Peloponnese is burning woodlands near the villages of Rodina and Kostomera, forcing the Fire Department to ask for inhabitants to evacuate as a precautionary measure.
The fires started raging suddenly in the Zacharo area around two in the afternoon and spread quickly because of the strong winds.
The fire originally began in a forest area near the village of Rodina and expanded very soon to the villages of Kostomera and Minfi. According to the Fire Department, at this time, eight firefighting airplanes and one helicopter operate from the air, while 34 firefighters with 17 vehicles and 14 hikers are involved in the battle to extinguish the fires.
The winds change direction very often, making the firefighters’ task all the more difficult. At some point a fire truck was trapped in the flames, but the firefighters managed to escape.
The fire burns a reborn forest in an area that was burned 10 years ago.