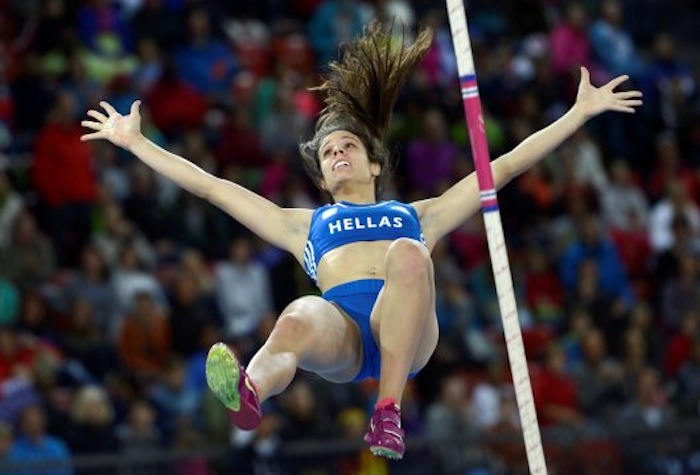 Katerina Stefanidi won her third gold gold medal in a year, breaking Greece’s paul vault record with a 4,91m jump during the World Championships in London on Sunday.
She became the first woman in the history of Greek sport, who managed to reach the top in all the three big athletic events, after winning gold at the Rio de Janeiro Olympics last year and gold at the European Championship in Amsterdam.
An achievement reached by a selected few Greek athletes, such as Kostas Kenteris in track and field, Pyrros Dimas in weightlifting, Elias Eliades in judo, Dimosthenis Tampakos and Lefteris Petrounias in gymnastics.
The Greek champion beat her main rival, Sandi Morris from the US, through optimum tactics and perfect jumps up to just below her personal best of 4.86 meters.
That was the fifth gold medal Greece has ever won in a World Championship.
Twenty-seven-year-old Stefanidi started the jumps from the latter stages of the final, making 4.65 m., 4.75 m. and 4.82 m. with three first-time clearances. She also attempted a new world record at 5.02 metres but was unsuccessful.
Speaking to state broadcaster, ERT, Stefanidi was quick to thank all the Greeks who stayed glued to their TV sets late in the night to watch her achievement.
“Right now I’m thinking about the gold medal in the indoor championships,” the world champion said, adding that she was not just happy about the title but also about the new record.
“I am happy about the record. I had two more good jumps at 5.02m, but it’s important that I cleared 4.91m. ”