GRNews
GreekReporter.comGreek NewsArtMuseum of the Greek Immigrant Up Next for Montreal

Museum of the Greek Immigrant Up Next for Montreal 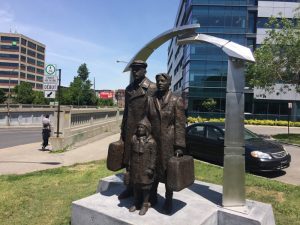 After the unveiling of the bronze Sculpture of the Greek Immigrant on June 30 at the corner of Jean Talon Street and Park Avenue in Montreal, with Mayor Denis Coderre present, in the enclave of Hellenism, Parc-Extension, the next big goal for the community is the creation of a museum dedicated to the tens of thousands of Greek immigrants who arrived in the city in search of a better life.

The Lyceum of Greek Women of Montreal is actively pursuing the idea for the museum. The organization coordinated the whole initiative for the Sculpture of the Greek Immigrant from the commissioning Greek artist Giorgos Houliaras to the placement of it, with the collaboration of the Hellenic Community of Greater Montreal and the Hellenic Congress of Québec.

The Greek immigrant museum objective is to gather artifacts that will reflect the experience of Greeks in the city- and in the whole province of Québec- and objects, memorabilia, photos, and documents describing the stories of expatriates and their families from their arrival in Montreal to the present day.

The establishment of the museum will require the support of the Montreal municipality, most likely through the allocation of space to house the museum.

In the meantime, the reaction from members of the Greek community has been overwhelmingly positive, as The National Herald discovered, for the aesthetic depiction and the location of the Sculpture of the Greek Immigrant.

President of the Lyceum of Greek Women is the Deputy Mayor of the city Mary Deros. In response to the unveiling of the sculpture, she reflected on her own memories, when she arrived with her family and half-empty suitcases at the Montreal train station (the one facing the Sculpture today) through Halifax, not knowing anyone or anything .

Deros confessed that as a young girl on the cold winter days, with the city covered by ice, she held onto railings in order to get to school without slipping. “The days were difficult and painful for all of us, but today, we are entitled to celebrate the success and integration of the Greeks into the main body of the city of Montreal,” she noted.

Meanwhile, the Sculpture of the Greek Immigrant continues to spark the interest of many expats from all over Canada and the northeastern United States, who rush to see it close up and take a photograph.

Menios Kanellopoulos, 42 years old, works in a local café, and told TNH the moving story of his children accompanying an elderly expatriate woman in a wheelchair who wanted to see the Sculpture of the Greek Immigrant close-up just last week.