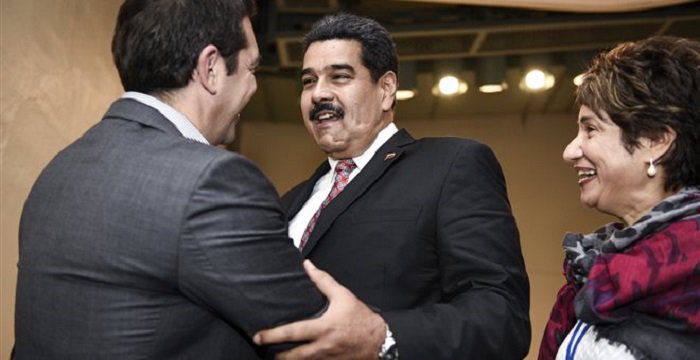 Greek diplomats denied a Financial Times report, according to which Athens blocked the imposition of EU sanctions to Venezuela.
According to Kathimerini news daily, diplomats dismissed the report as “misinformed”.
The same sources insisted that sanctions “were never proposed” during a meeting on Wednesday to decide how the EU should react toward Venezuelan President Nicolas Maduro’s government, after Sunday’s controversial constitutional elections.
New Democracy urged the leftist-led government to clarify its position in “a formal and categorical fashion,” adding that the foreign media had portrayed Athens as “a key and persistent champion of Maduro’s regime.”
The EU has declined to recognize the result of Venezuela’s vote.
Plenty of controversy has surrounded the alleged relations between the Syriza-led government and the Maduro regime in the months leading to the dramatic July 2015 bailout negotiations between the Greek government and the EU.
According to former Greek Finance minister Yanis Varoufakis and former Syriza MPs and ministers, numerous negotiations, concerning potential oil imports, between the governing party and Venezuelan officials, took place in late 2014 and early 2015.