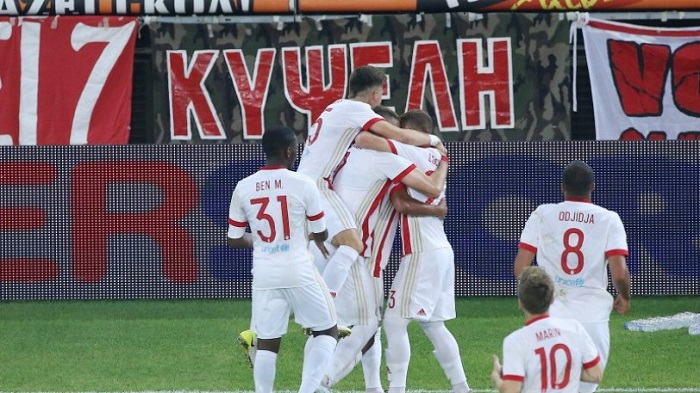 Olympiacos and APOEL FC remain on track to qualify for the group stage of the UEFA Champions league after successfully completing their third round qualifying ties midweek.
Olympiacos successfully closed out its tie in Piraeus against Partizan Belgrade with a 2-2 second leg draw, giving them a 5-3 aggregate.
The Greek champions twice took the lead in each half through Carcela in the 22nd minute and then through Greek international Kosta Fortounis’s 51st minute header only to be pegged back by goals in each half to Partizan’s Seydouba Soumah and Durdevic.
Whilst Olympiacos remains in contention, AEK Athens were eliminated in their attempts to qualify for the Champions League after going down 1-0 away to CSKA Moscow in their second leg Round 3 Qualifying match in Moscow.
Meanwhile Cypriot club APOEL FC progressed to the Champions league Play-off round by defeating Romanian club Viitorul 4-0 in Nicosia but had to rely on extra time after the scores were locked at 1-1 on aggregate, following APOEL centre-back Carlao’s 54th minute goal.
Three extra time goals to Merkis 93′, De Camargo 94′ and Efrem 105′, gave the home team a 4-0 win on the night and a 4-1 win on aggregate.
Panathinaikos, PAOK Salonika and Panionios, are the remaining three Greek clubs playing their respective second leg Europa Cup matches tonight.