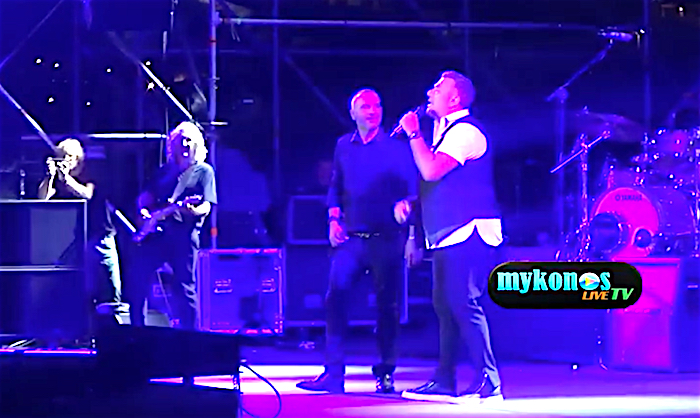 Thursday’s annual Antonis Remos super party on Mykonos, this year had Eros Ramazzotti as special guest and, as every year, it was a show of riches and excess.
The front tables of lavish Nammos restaurant on Psarou Beach were occupied by wealthy Lebanese, Turks, Arabs and one Greek who paid 15,000 euros for each one, while the turnover for the night was 2 million euros at 5:30 am with the show still in full swing, according to Mykonos TV reports.
About 3,000 people attended the show, with the organizers speaking of a record in receipts. The stage was set in the water, adding more to the island ambience of the extravagant event.
In crisis-stricken Greece, a team of eight Tax Office agents had their own table to oversee the event. It is estimated that the tax revenue for the event would be about 500,000 euros, which would go to a special state account directly.
Eros Rammazzotti went on stage first and sang some of his greatest hits. The Italian star warmed the crowd saying a few words in Greek. Then Antonis Remos came on stage amidst ecstatic applause. The two hit makers sang one song together. Then both performers left the stage with the DJ playing popular songs.
When Remos came on stage a little before 4:00 am, fireworks lit up the sky of the cosmopolitan beach. The Greek super star greeted the multinational crowd in several languages and urged the Greeks to show foreign guests how people have fun in Greece.
Remos sang most of his well-known songs along with hits by departed singer Pantelis Pantelidis. Greece’s top entertainer sang until the sun came up on Psarou Beach, as many from the audience walked into the water to have a better view and dance.