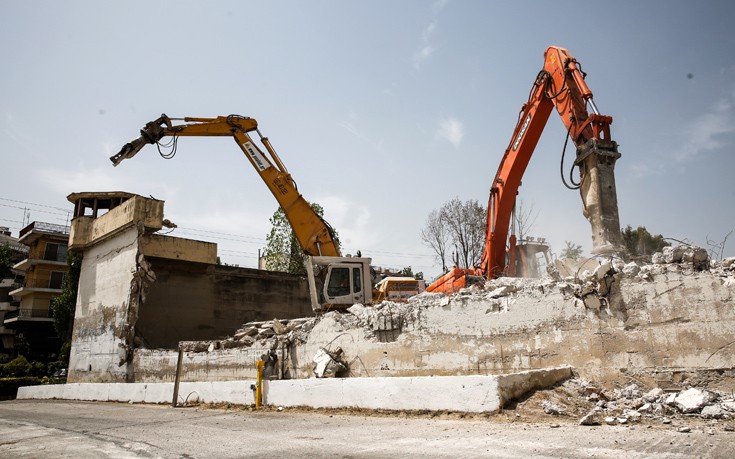 The perimeter wall outside the Korydallos women’s prison was demolished in the presence of Justice Minister Stavros Kontonis, local government officials and Piraeus-area MPs on Tuesday, in a first step toward converting the site into a public park.
“Today is a day of joy and moral satisfaction. In place of the grey walls and cells there will soon be a park for greenery and recreation,” said Korydallos Mayor Stavros Kasimatis, saying the authority will continue its struggle for the full and permanent removal of the prisons from Korydallos.
Kontonis said that the government had accepted the municipality’s request “and tried with all its might to implement what it promised.” He also noted that Prime Minister Alexis Tsipras had a “direct interest in this development” and that the entire government had worked to bring it about.
Regarding the mayor’s call for the complete removal of the prisons from the area, however, Kontonis said that this was an issue linked to the more general economic situation and the capability to build new prisons.
The site covers 10 stremma (one stremma is 1,000 square meters) and formerly housed three wings of the Korydallos women’s prison. The municipality already has plans to convert this into a park with a budget of 5 million euros financed by the Attica Region.
(Source: ANA-MPA)

Intubations and deaths amongst those with Covid-19 remain high in Greece as retail shops opened around the country on Monday.
Europe