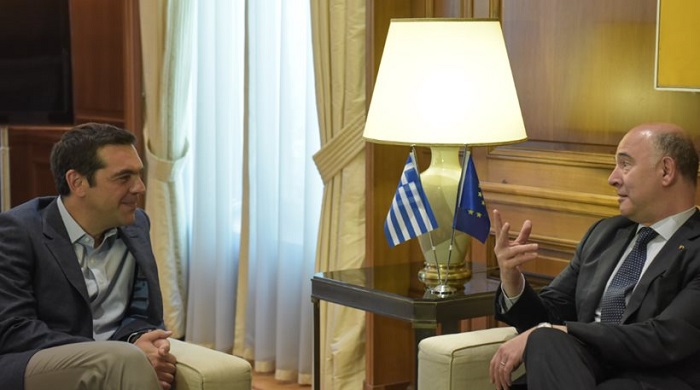 Greece sold debt to private investors for the first time in three years, an upbeat Prime Minister Alexis Tsipras hailed what he called a “special day.”
At his meeting in Athens with EU Commissioner Pierre Moscovici, Tsipras that “it is the day that Greece successfully returns to the markets, and this is the most important message and the most essential step in concluding this unpleasant adventure of the memorandum.”
“The information so far is very positive,” he said adding that investors have welcomed the Greek bonds.
“Now it is the time to talk about Greece’s future, how we will cooperate, how we will work in order to successfully conclude the programme next year and plan the next day for Greece,” Tsipras underlined.
Pierre Moscovici, said he was confident Greece was “turning a page” from economic crisis and would successfully conclude a bailout program which expires in August 2018.
But Moscovici said the crisis-hit country was at a crucial juncture and urged Greece to keep up economic reforms.
“To legislate a reform is positive but to implement it is more significant,” he told reporters.
“Returning to the markets is an important first step,” Moscovici told reporters.
After a three-year hiatus, Greece launched a return to bond markets, widely seen as a test run for authorities before its third financial bailout from international lenders expires next year.
“It is also a signal to markets that Greece is showing results as far as its commitments are concerned and the reforms which have been decided and is back onto a path of sustainability,” Moscovici said, speaking through an interpreter.
Greece has invited holders of its 4.75 percent outstanding bonds maturing in 2019 to tender them for cash, along with a plan to offer new five-year paper.