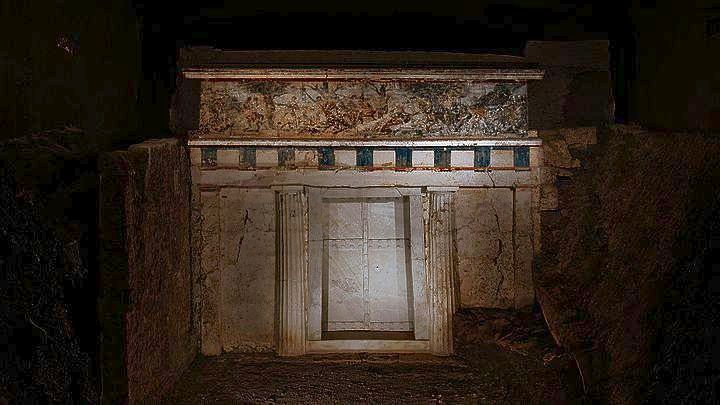 No ancient artifacts have been damaged in any way, the Imathia Antiquities Ephorate announced on Wednesday in response to press reports about an incident at the Vergina Royal Tombs Museum on May 10, when a female visitor managed to spray items in the exhibition with a clear oily liquid.
“There was no damage to ancient objects while the fixtures of the exhibition were cleaned straight away, without the oily substance leaving any residue or traces,” the announcement said, noting that the unidentified woman had sprayed the present-era stone pedestals on which the funerary stele were set and other exhibition fixtures.
“The police were informed right away and charges against person or persons unknown have been pressed. The Hellenic Police has been investigating the case since that time, while the security personnel on guard were cautioned and rebuked,” the announcement continued.
The incident was reported in Wednesday’s issue of the national daily “Vima,” which said that a foreign woman visiting the museum had managed to sneak in a small spray-bottle without being seen and had sprayed a clear, oily liquid on the porous bases of more than 10 funerary stele, producing large “stains” on the display, while she also sprayed the same liquid on a large number of signs and photographs in the area.
Source: ANA-MPA