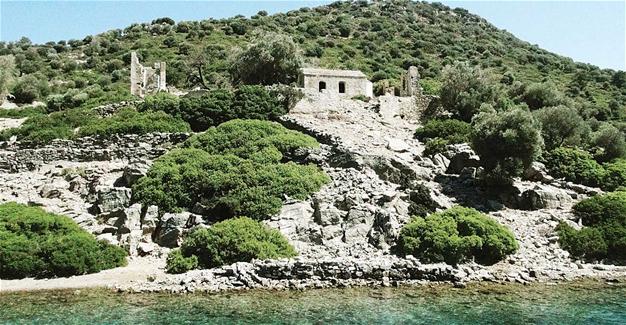 An 1,800-year-old Greek Orthodox Church and its monastery situated on the Kameriye (Kamelya) Island in the Aegean Sea, just off the Aegean province of Marmaris, is facing risk of collapse, says a report in Turkish daily Hurriyet.

Restoration plans for the church and its monastery, a popular spot for tourists, were prepared in 2013 with the aim of creating an alternative destination especially for faith tourism.

The site also draws interest from Greek Orthodox believers, some of whom want to perform their marriage ceremonies at the church they deem holy.

But the restoration works have still not begun due to bureaucratic obstacles, Mehmet Baysal, chairman of the Marmaris Chamber of Commerce, told Doğan News Agency.

The situation of the church and monastery are drawing fury among locals too.

Sener Oztekin, a tourism professional in the region, who organizes regular boat trips to nearby islands and bays, said the Kameriye Island was looking more miserable every passing day.

“Although we do cleaning on the island at the start of the tourism season, the visitors abuse it throughout the season,” Oztekin said.

“All the trees on the island have been converted into a ‘wish tree,’ covered with pieces of cloths. During the season, almost 1,000 visitors come here every day. Years ago, somebody tied a cloth to a centuries-old olive tree and everybody else continued to do so, with hopes that their wishes will come true. That olive tree is much older than the church. The church was built much later but it is in a grim situation, everything in it has been plundered. I am ashamed to show it to visitors, officials must find a solution to this situation,” Oztekin added.