GRNews
GreekReporter.comGreek NewsCrimeAthens: Greek-Australian Attacked by Hooded Men for Shopping on a Sunday

Athens: Greek-Australian Attacked by Hooded Men for Shopping on a Sunday 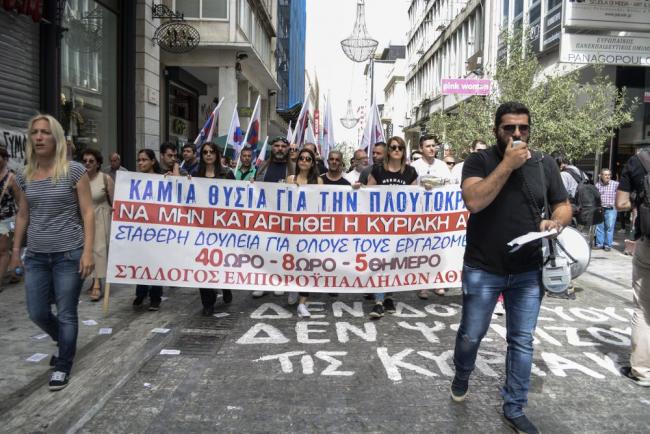 On Sunday new protests against shops opening on Sundays occurred in Greece’s capital by unionists and employees. Following the end of one of the protests on Sunday, a Greek-Australian tourist was attacked in Athens by four hooded men for shopping on a Sunday.
“I was walking with my family, and they came near and punched me for no reason. I didn’t tell them anything, I didn’t know them. They told me ‘do not shop’,” the man told TV reporters during an interview about the incident.
The incident took place in front of his wife, daughter and mother-in-law as he exited a store on Ermou Street in central Athens.
“We were just walking and four men, they suddenly turned around and hit my husband. There was blood everywhere, my daughter cried and fainted. I tried to pull him away but they did not care, they pushed me, my mother and the kid,” the victim’s wife told reporters.
“Seriously, what kind of animals are they? This can’t be happening. We are just tourists, we are returning to Australia tomorrow. We came here and spent our money for your economy, and they hit us? I’ll never come again, that’s for sure.”