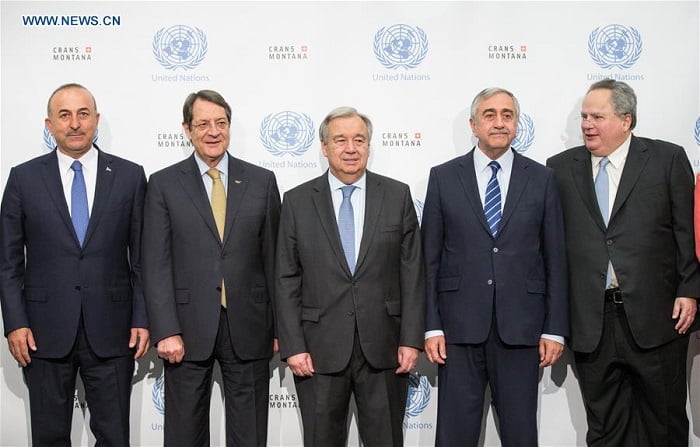 The Greek Foreign Ministry on Saturday said that Turkey is responsible for the failure of the Conference on Cyprus reunification in Swiss Crans-Montana.
The ministry stressed in the statement titled “International Conference on Cyprus: hard truths” that the Turkish side refused to agree in a written document on the points that had been discussed before, as well as rejecting the abolition of the right for intervention in Cyprus.
“Turkey compromised the effort of the United Nation Secretary General Antonio Guterres on Thursday to set down, in writing, the points of convergence that had been achieved, in order to shape a framework for an agreement so that conclusive negotiations could continue, with Greece’s consent, in New York”, the statement says.
But, it continues, “when the critical moment was reached at the Conference, Turkey resolutely refused to allow a number of promises it had made to the Secretary-General to be set down in writing.”
“Greece attended the Conference in Crans-Montana determined to contribute in every possible way to resolving the Cyprus problem, and in the hope that everyone would act in such a direction. But Turkey’s conduct dashed any hopes anyone had that there would be a change in its stance. Just as Turkey abandoned the first Conference, in Geneva, it torpedoed the second. Turkey drove the Crans-Montana conference to an impasse,” the ministry said in the statement.
“The Turkish side also revealed during the dinner of 6 July that it wants to continue the violations in the name of the Treaty of Guarantee, to ensure and perpetuate its military presence in Cyprus… So the Conference ended with the revelation/confirmation of Turkey’s true intentions, which run counter to international law and the resolutions of the UN,” the statement specified.