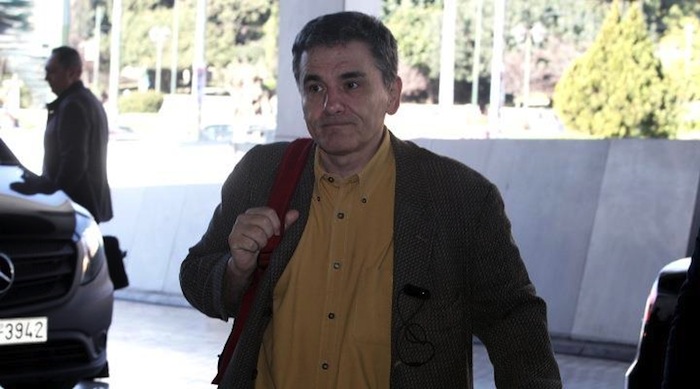 Greek Finance Minister Euclid Tsakalotos expressed his confidence that the ESM will approve the disbursement of a loan tranche to Greece on Friday.
Speaking to reporters, after a teleconference held by the European Stability Mechanism in which he participated, Tsakalotos said: “I am 100% certain that the disbursement will be approved on Friday. I would not have said that if I was not 100% certain.”
Commenting on the prior actions set by the IMF and referred to in an ESM press release, the Greek FinMin said these referred to two ministerial decisions “not policies but technical issues which we are looking at right now.”
These prior actions refer to an out-of-court debt restructuring mechanism and the opening of the profession of engineers.
Tsakalotos said the issue of Sunday operation of shops has been resolved, while the issue with the State’s Legal Council was not to be addressed immediately.
The Greek government is expected to send a “letter of intentions” to the IMF, today or tomorrow.
The European Stability Mechanism on Wednesday approved the Supplemental Memorandum of Understanding (MoU) with Greece in a meeting via teleconference. This follows the conclusion of the second review of the ESM programme for Greece.
The Supplemental MoU is a document updating the reform commitments undertaken by the Greek Government in the original MoU signed in August 2015.
The ESM Governors also discussed some outstanding issues related to pending legal cases affecting TAIPED (Hellenic Republic Asset Development Fund) experts and ELSTAT (Hellenic Statistical Authority) officials, as well as the state of play of IMF prior actions.
The Governors encouraged the Greek government to resolve the pending issues swiftly. This would pave the way for the approval of the third tranche of ESM financial assistance to Greece of 8.5 billion Euros by the ESM Board of Directors.
The ESM Managing Director rescheduled the teleconference meeting of the Board of Directors, initially planned for today, to Friday, July 7.
Source: ANA-MPA