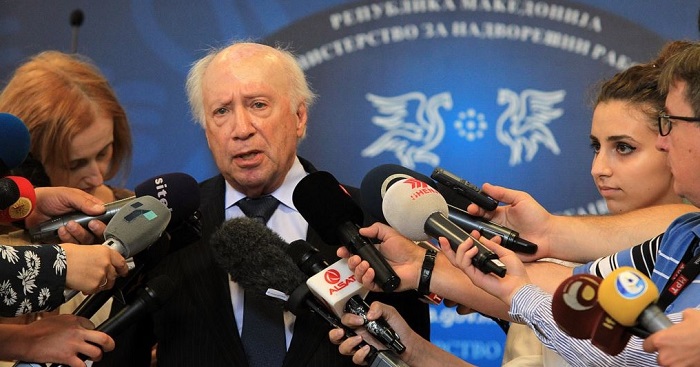 A United Nations’ special envoy says he is “encouraged” by the stance of the Former Yugoslav Republic of Macedonia (FYROM) new government toward resolving its long-running dispute with Greece over the country’s name.
Matthew Nimetz met in Skopje with FYROM Foreign Minister Nikola Dimitrov Monday in a bid to restart talks stalled for three years, and said he detected a “positive atmosphere.”
“We have a new government here and a new context in the region,” Nimetz said.
However, he said more work is needed, and urged both sides to “think very seriously about their positions and listen carefully to the other side.”
Nimetz, who last visited FYROM in 2014, said the new government showed a serious interest and determination to deal with the issue.
FYROM and Greece have been at odds since 1992 over the Balkan country’s name.
Greece objects to Skopje’s use of the name Macedonia, saying it implies irredentist and territorial ambitions on the part of Skopje.
Greece’s objections have complicated Skopje’s aspirations to join NATO and the European Union.