Tsipras, Mitsotakis Clash in Parliament Over the Economy 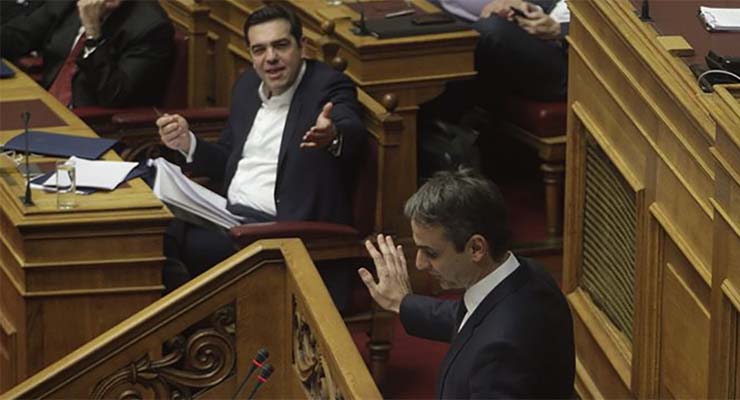 Greek PM Alexis Tsipras defended the recent Eurogroup agreement and expressed optimism on the prospects for the economy during his speech at the Greek parliament.
Tsipras attacked the opposition who have criticized the agreement saying that they are “prophets of disaster” and should apologize.
The Greek economy is improving and very soon it will return to competitive and sustainable levels in terms of its lending, noted Tsipras.
He also underlined that “the agreement is a positive landmark towards the conclusion of the programme” because as he stated “it includes, for the first time, commitments not only promises for the settlement of the Greek debt.”
The debt settlement measures will start to be implemented immediately after the conclusion of the programme, noted Tsipras.
He also said that the investors know how to read the agreement and for this reason they “throw any scaremongering attempts in the dustbin.”
Greece’s return to the markets would not be feasible without the debt settlement, Tsipras stated adding that the government’s negotiation lowered the primary surpluses and made the lenders commit on the debt settlement.
He also said that the terms and conditions for sustainable and definite return to the markets have been formed adding that the government’s plan on the reduction of unemployment is bearing fruit.
Tsipras referred to the building of the social state reminding the offset measures voted by the government which will start to be implemented from 2019.
The premier noted that the target for the primary surplus will be met and the offset measures will be implemented.
Replying to Tsipras, leader of main opposition New Democracy, Kyriakos Mitsotakis called on the government to resign.
“You’d better leave now. For once, keep your promises. In democracies, there are no impasses. Greece needs a political change and another way of thinking. The future cannot wait for you,” Mitsotakis said.
“The power has corrupted you,” he added.
On the economy, he accused the prime minister of failing to meet the targets he set last September adding that SYRIZA deputies would vote for more measures in order to remain in power.
Mitsotakis stressed that his party has a plan and a vision and will manage to persuade the lenders to reduce the primary surplus targets, to attract investments, to implement the reforms and set the country on growth track while improving the everyday life and the finance of all the Greeks.
(With information from ANA-MPA)