Quake-Stricken Vrisa Must Become 'As It Was' President Pavlopoulos Says 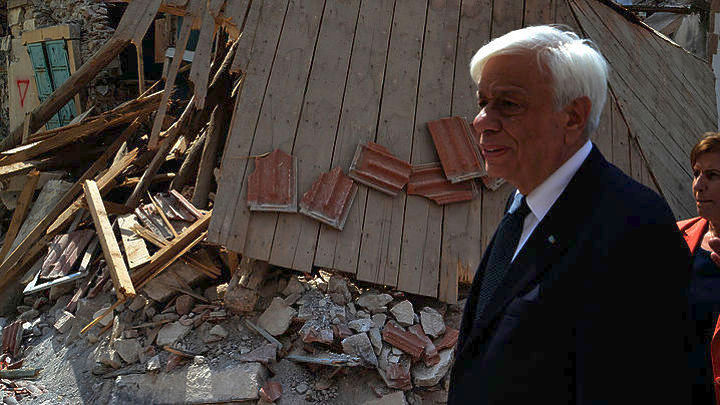 The European Union must “reach the limits of its laws” in order to assist work to restore quake-stricken Vrisa and another 12 settlements on the island of Lesvos, President of the Hellenic Republic Prokopis Pavlopoulos said on Sunday while visiting the village.
The president walked about the badly damaged village, much of which was leveled by a June 12 earthquake that has now been officially registered as a 6.3-Richter magnitude tremor.
Pavlopoulos said that Vrisa’s damaged buildings had to be restored since they were part of the cultural heritage of Lesvos, Greece and Europe. He also noted that the disaster had struck an island that was already on the front lines of the refugee crisis and had responded with unprecedented feelings of solidarity, which was one of the “fundamental values” of the European Union.
“Europe must now show its solidarity to the sorely tested people of Lesvos and especially this part, the south of the island and Vrisa,” he said.
He also expressed his “absolute faith” that EU aid will be forthcoming during meetings with Lesvos Mayor Spiros Galinos and other local authority officials.
“We will undertake the study of the project. There will be help, and I believe this absolutely, from the two commissioners responsible,” he said, pointing out that one was Cypriot European Commissioner Christos Stylianides and the second was Greece’s European Commissioner Dimitris Avramopoulos, with whom he had already spoken.
He also expressed his conviction that the state and all the political forces will work together to complete this important project as soon as possible.
Pavlopoulos arrived on the island by helicopter from Psarra, accompanied by Shipping and Island Policy Minister Panagiotis Kouroumblis, Deputy Education Minister Kostas Zouraris and Island Policy General Secretary Yiannis Yiannelis. He was briefed on the repercussions of the earthquake by geologists and seismologists currently on the island to monitor the post-quake seismic sequence.
Source: ANA-MPA