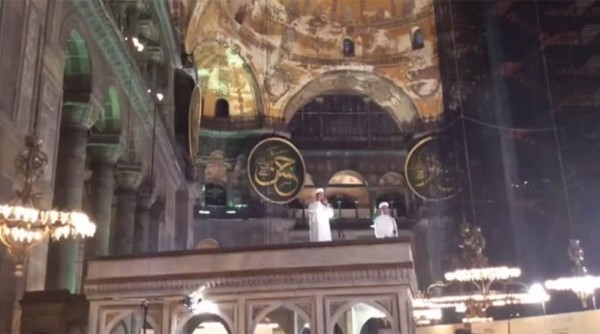 The Turkish Foreign Ministry issued a statement condemning Greece’s reaction to the reading of the Quran and call for prayer in Hagia Sophia, accusing Greece of not respecting religious freedom.
The statement calls on Greece “to be a modern and democratic country and respect all religions.
The Turkish ministry accuses Greece of not protecting fundamental human rights such as freedom of religion and repressing Muslims of Western Thrace.
“The Ministry of Foreign Affairs of Greece, instead of extending its congratulations to the Turkish people on the holy month of Ramadan and the “Night of Power,” opted for distorting the recital of Quran and call for prayer in Hagia Sophia,” the statement continues.
The official announcement also condemns Greece for not having open mosques for Muslims to pray.
Earlier, Greece had complained to UNESCO that the Turkish government is trying to convert the World Heritage Monument that Hagia Sophia is into a mosque.
U.S. State Department: Turkey “to preserve the Hagia Sophia in a way that respects its complex history”
In the June 22 press briefing of the U.S. State Department, spokesperson Heather Nauert was asked what the position was of the State Department in holding the Quran reading and call to prayer in Hagia Sophia.
To that Nauert replied: “The site, Hagia Sophia, is a site of extraordinary significance, and we understand that and we respect that. So we call on the Turkish Government to preserve the Hagia Sophia in a way that respects its complex history.”
When asked whether the State Department opposes the idea of turning Hagia Sophia into a mosque, the spokesperson replied: “I’m not saying that at all. It’s a complex history, and we recognize that it is of great significance to other faiths, many faiths. And so we would just encourage the Turkish Government to do that, to preserve it.”