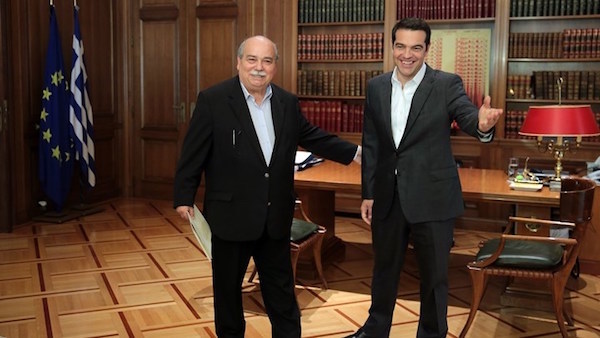 Prime Minister Alexis Tsipras had a meeting on Tuesday with Parliament President Nikos Voutsis, immediately after concluding a round of meetings with Greece’s political party leaders to brief them on the June 15 Eurogroup agreements and developments concerning the Cyprus issue.
Greeting Voutsis, the prime minister said there had been a good outcome at the Eurogroup concerning debt relief and noted that the final conclusion of memorandum programmes was now visible. He then briefed Voutsis on his talks with the opposition leaders regarding the Cyprus issue ahead of a second Geneva meeting in order to craft a united national stance.
Voutsis said the June 15 agreement had created an atmosphere of optimism among people that a final end of the crisis was “in the hands of the political system.”
“This does not mean that all problems are solved,” he noted, however, adding that a discussion on the agreement will take place in Parliament next week “but it is important to look at what comes after.”
On the Cyprus issue, he repeated his opinion that no solution would be a wrong solution, noting that Cyprus was an equal member of the EU and was acting on the basis of a just solution that could and must prevail.
Tsipras earlier met main opposition New Democracy leader Kyriakos Mitsotakis, opposition PASOK party leader Fofi Gennimata and Communist Party of Greece (KKE) General Secretary Dimitris Koutsoumbas, continuing a round of briefings of the political party leaders begun on Monday, when he met Potami party leader Stavros Theodorakis and the leader of the Centrists’ Union Vassilis Leventis.
Receiving Mitsotakis, Tsipras commented that it was his obligation to inform the political party leaders on issues of national importance, regardless of any disagreements that may exist, with Mitsotakis replying that he was always at the government’s disposal.
ND’s leader said that the results of the Eurogroup and the negotiation generally should be discussed in Parliament “so that the Greek people find out the truth.”
“On the national issues I am always at the government’s disposal and when there are issues that must be discussed in private, I am at your disposal,” Mitsotakis added.
Responding, Tsipras noted that “some thoughts and strategies should be guarded” even in an age of almost instant information and speed, where everything was quickly found out.
Tsipras had earlier received PASOK leader Fofi Gennimata, though the tone of their discussion was distinctly sharper, with Gennimata afterwards accusing him of seeking consensus “after the fact.”
In their discussion before the cameras, Gennimata disputed the prime minister’s suggestion that the Eurogroup agreement would give Greece some breathing space “given that you have put a noose around our neck,” with Tsipras replying that “[your party] got us into the memorandums and I will get us out.”
“From now on there is only one path, the path of exiting the crisis,” he said, to which Gennimata replied that things were very difficult and, as someone responsible for two additional memorandums, Tsipras did not have the leeway to say things that gave false hope.
“What the Greek people want from all of us now is honesty. To know where they stand and what their prospects are, what can really be done for people. The big words and promises have been tested and everyone now knows where we are, what happens from here on,” Gennimata said.
Speaking from her own party headquarters after the meeting, Gennimata accused Tsipras of only seeking ways to “manage” his defeat on a communications level, after having “torpedoed the necessary national understanding at every opportunity.” The reality of the Eurogroup agreement could not be hidden, she added, and it was a failure for Greece.
“A cycle has indeed ended; that of false promises that did great damage to the country. The citizens now demand honesty above all,” she said.
Tsipras will brief the cabinet on Wednesday.
(Source: ANA-MPA)