GRNews
GreekReporter.comLifeeventsGreek-Jews in Karditsa Unveil Monument to Thank Village That Hid Them From... 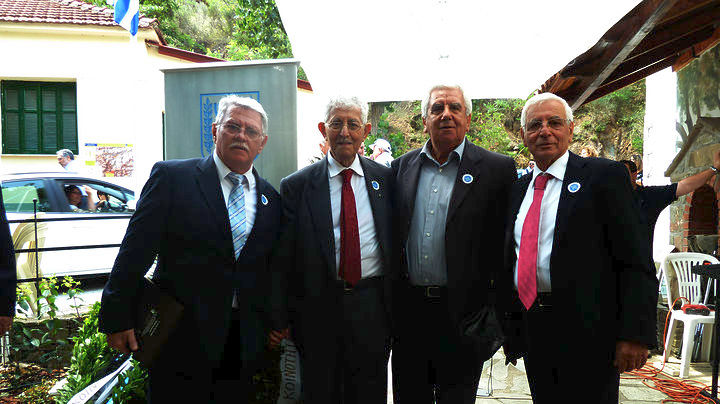 Greek-Jews thanked the residents of the village of Amarantos in Karditsa on Sunday who protected them or their relatives from the Nazis during World War II, during the unveiling of a monument of “eternal gratitude and recognition” to commemorate the event.
“Those residents who are still living and those of you who have passed, have a special place in our hearts, of eternal gratitude. I see around me my family, children, grandchildren, relatives and on behalf of all, I have to thank you with all my heart because we exist thanks to you,” the president of the Jewish Community of Karditsa, Maki Kapeta, told the 500 attendees.
The residents of Amarantos, called Mastroyianni in the ’40s, offered a safe haven and hospitality to the 62 Greek-Jews of Karditsa and another 20 from Thessaloniki, Volos and Trikala from the autumn of 1943 until the summer of 1944, sharing their scarce food supplies they had in their homes.
Victor Venouziou, a retired civil engineer from Karditsa who lives in Thessaloniki, and a life-long honorary member of the Jewish Community of Thessaloniki, is one of the ten living survivors who were hidden by locals in a house in Amarantos and the one who paid for the creation of the monument.
He thanked the residents of Amarantos and the municipality of Karditsa. “I would like to say it loud, a big ‘well done’ to the Mastroyiannites [and] to the organizations EAM-ELAS a ‘thank you’; they were the ones who saved us. The support of EAM was crucial,” he said.
Visibly moved, the representative of the Central Jewish Board, Solomon Parente, said one of the local families saved his mother’s parents and the siblings. “My uncle, Danny Ezra, is here today with us. He came from Israel where he lives to walk again in the alleys of this beautiful mountain village which back then, amid the uncertainty of the Occupation, offered him the most valuable and elusive gift: safety,” he said.
Source: ANA-MPA