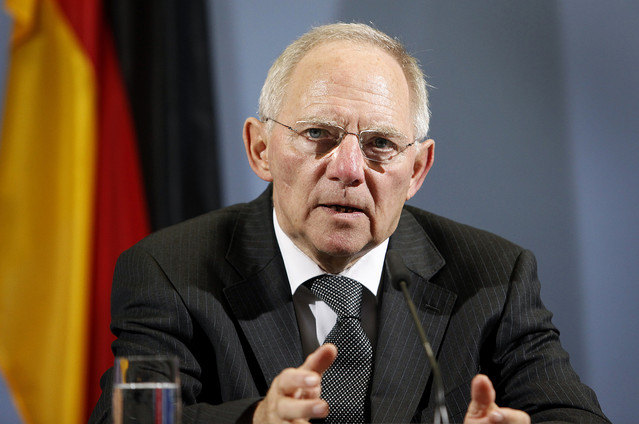 The tough stance he adopted toward Greece in the negotiations had a positive impact on the country, which was now further along with reforms that it might otherwise have been, German Finance Minister Wolfgang Schaeuble suggested on Friday, in statements after the ECOFIN meeting in Luxembourg.
“We are on a path of economic recovery in Greece also,” Schaeuble said in response to questions, noting that this helped bring the second review of Greece’s programme to a successful conclusion. The lengthy and tough negotiations “had a positive impact on Greece in the end, because it is now on a better path and, if it continues, we can all be satisfied,” he said.
Schaeuble noted that the goal of the programme was to allow Greece to return to the markets next year. “If it succeeds — and several things point to this being possible — then we are on a good path,” he added.
While admitting that Europe was “demanding a lot of Greeks,” Schaeuble said the issue was how to make the country competitive and bring about the changes that would allow Greece to stand on its own feet. “This is for the Greek government to decide, a matter of national sovereignty, and a matter for the Greek Parliament and the Greek government,” he said.
The fact that the International Monetary Fund (IMF) was withholding financing until later was a divergence from the previous agreement, he admitted, but not one of “decisive importance.” The basic issue, the German finance minister said, was for Greece to implement reforms in order to become competitive and improve its fiscal performance.
He appeared confident that the German Parliament will vote in favor of the Thursday’s Eurogroup deal, since it was not essentially different from that agreed in May concerning the IMF.
(Source: ANA-MPA)