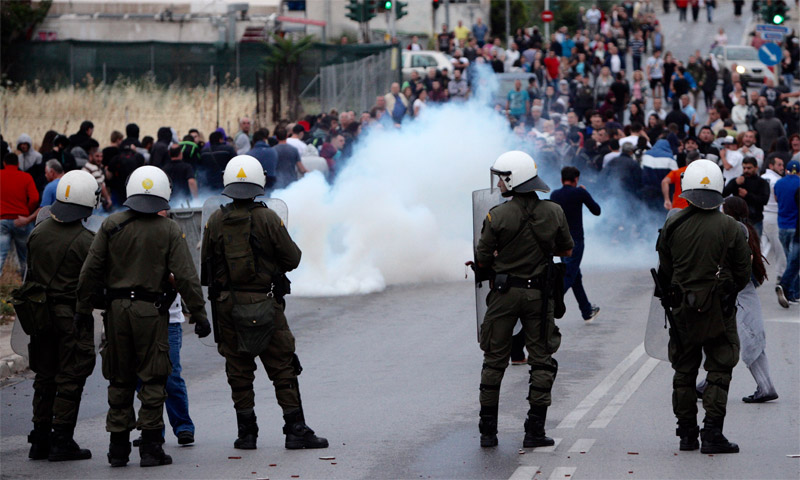 Greek riot police on Sunday stopped angry crowds of Menidi, Attica residents who tried to attack a Roma community, after the accidental death of an 11-year-old boy by a stray bullet fired by a Roma.
About 200 people held a protest rally for the death of the child who was killed by a stray bullet during an open-air gymnastics exhibition for schoolchildren on Thursday. Later it was found out that a 23-year-old Roma was firing shots in the air that day and he is suspected of being responsible for the fatal shot.
During the rally, a group of people broke off from the protesters and threw firebombs at the community, causing damages to two homes. Police responded with tear gas, causing a clash with protesters.
According to protesters who spoke to Star television, during the riot the Roma were shooting in the air but police did nothing about it. Area residents also told reporters that living in the area is very dangerous because of the criminal activities of the Roma. One of them showed the reporter a bullet shell he found on his balcony.
Α mother told reporters that her 5-year-old girl had been hit in the head by a stray bullet while at school a few months ago and luckily survived. She complained that the area is dangerous and that her pleas to police to intervene were in vain.
Meanwhile,Trainose, Greece’s rail service operator, said that rocks were thrown at a train as it passed through Menidi, on the Halkida-Athens route. No damages or injuries were reported.

A prosecutor in Greece ordered a probe, following allegations claiming sexual harassment of young athletes by coaches in gymnastics.
Business

UK PM Johnson said he is proceeding cautiously with resuming international travel, saying he doesn't want to "re-import" the coronavirus.