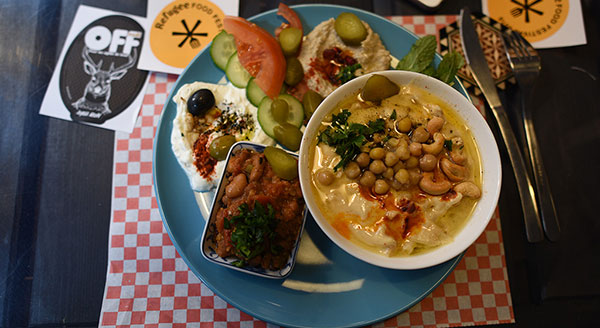 The Refugee Food Festival, a partnership between the NGO Food Sweet Food and UNHCR, is coming to Athens from June 18 till June 22 to coincide with the World Refugee Day (June 20).
The event, a civil society led initiative born in 2016 to showcase refugees’ cooking talents and facilitate their integration, is expanding to thirteen major European cities in 2017, among which is also Athens.
During the festival, restaurants in Athens will incorporate in their menu specialties cooked by professional refugee chefs, hoping to offer a unique dining experience for customers. The cuisines that will be represented are Syrian, Iranian, Somali, Kurdish and Afghani.
The event, which started in France, has been an accelerator for refugees’ culinary careers in France by showcasing their cooking skills, resulting in professional opportunities for all participating refugee chefs.
The schedule and restaurants participating are the following:
Sunday, 18th June
Iranian cuisine with Mahboubeh Tavakoli at “Yi” in Glyfada (dinner)
Monday, 19th June
Syrian-Kurdish cuisine with Barshank Haj Younes at “Seychelles” in Keramikos (dinner)
Tuesday, 20th & 21st June
Somalian cuisine with Hassan Hassan at “Vassilenas” near the Hilton (dinner)
Wednesday, 21st June
Syrian cuisine with Abdul Al Hallak at “7 Food Sins” in Plaka (dinner)
Thursday, 22nd June
Afghan cuisine with Reza Golami at “IT Restaurant” in Kolonaki (dinner)
For bookings, customers will have to contact the restaurant directly. More information on the link:http://www.refugeefoodfestival.com/athens
Source: ANA-MPA