Deadly Terror Attack in London: Pedestrians Run Down, Others Stabbed 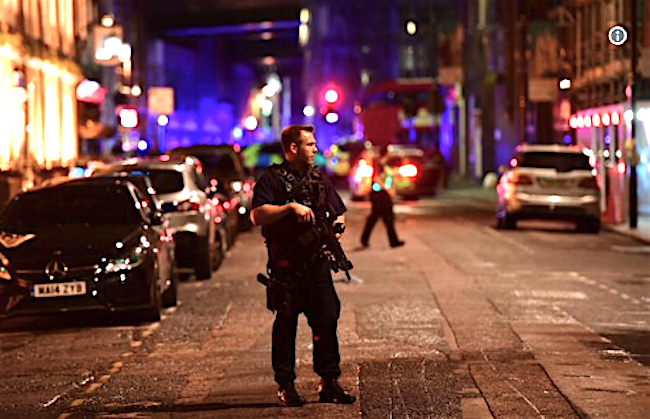 A large delivery van drove into pedestrians at high speed on London Bridge late Saturday evening, striking a number of people who were left bleeding on the pavement in the British capital. Near the scene of the road terror, attackers also carried out multiple stabbings.

Multiple reports said more than one person had died, and the casualty toll was expected to rise. The London Ambulance Service said via Twitter that it had “taken at least 20 patients to six hospitals across London.”

Authorities declared the incident was a terrorist attack. Heavily armed police searched the area and ordered pub and restaurant patrons to move to safety. Police fired a number of shots; witnesses said two attackers were hit, but that three others had escaped.

London police at first suspected a stabbing in South London might have been linked to attacks on and near the London Bridge. A later statement, however, confirmed the stabbing in the Vauxhall neighborhood was unrelated.

The terrorist attackers, some of them wielding knives with 25-centimeter-long blades (about 10 inches), may have been planning explosions as well. A photograph from inside the police cordon showed an attacker motionless on the ground, with a number of metal canisters strapped to his body; meanwhile, police in the area triggered a number of controlled explosions.

The mayor of London, Sadiq Khan, denounced the attack and said he and British Prime Minister Theresa May would take part in an emergency meeting of the government’s Cobra crisis group.

“We don’t yet know the full details,” the mayor said, “but this was a deliberate and cowardly attack on innocent Londoners and visitors.

“I condemn it in the strong possible terms. There is no justification whatsoever for such barbaric acts.”

The Saturday night carnage on London Bridge and in the nearby Borough Market neighborhood was the third terrorist attack in Britain since March, following a similar assault on pedestrians on Westminster Bridge and a suicide-bomb explosion less than two weeks ago in Manchester that killed dozens of people and wounded more than 100.

The U.S. State Department said it “condemns the cowardly attacks targeting innocent civilians in London.” The statement continued, “We understand UK police are currently treating these as terrorist incidents. The United States stands ready to provide any assistance authorities in the United Kingdom may request.”

The U.S. Department of Homeland Security said it was in close contact with British authorities.

“At this time,” an official statement said, “we have no information to indicate a specific, credible terror threat in the United States” as a result of the London attack.

​The U.S. Embassy in London issued an alert to U.S. citizens in the area.

In Washington, President Donald Trump sent a message of support and help to Britain, but he also tweeted that the attacks across the ocean emphasized the correctness of his strict policies on immigration. Other users of social media, both in the U.S. and in Britain, criticized Trump.

Few details of what occurred were confirmed officially in the chaotic first hours.
It was after 10 p.m. in London when the first alarms sounded about a wild driver steering his vehicle deliberately into pedestrians on London Bridge, and most of the accounts that followed for several hours came from multiple sources on the ground — witnesses, bystanders and journalists.

Most witnesses said they saw a white van heading toward Borough Market veer off the roadway at high speed, probably in excess of 80 kilometers per hour (50 mph), and drive into pedestrians; about five to eight people who had been walking across the bridge were hit and thrown to the pavement.

Several witnesses had said it appeared that the attackers had escaped after knocking over the pedestrians. Other witnesses said they saw at least two people who had been stabbed in a restaurant close to Borough Market.

“We will release facts when we can,” London’s Metropolitan Police said on Twitter. “Our info must be accurate.”

Police posted tweets updating the situation throughout the night and launched a social media campaign calling on the public to “RUN, HIDE, TELL” — in other words, to first go to a safe place quickly. “If there’s nowhere to go, then HIDE,” the police announcement said. “Turn your phone to silent and turn off vibrate. Barricade yourself in if you can,” and call police when it is safe to do so.

May was monitoring the situation from her office at 10 Downing Street. In Washington, White House press secretary Sean Spicer said U.S. security officials were following the events in London closely, and that Trump was up to date on the details.

Trump himself posted a note on Twitter saying, “Whatever the United States can do to help out in London … we will be there.”

His first tweet about the London attack, sent several minutes earlier, appeared to refer to the incident in the context of his administration’s efforts to restrict immigration to the U.S.: “We need to be smart, vigilant and tough. We need the courts to give us back our rights. We need the Travel Ban as an extra level of safety!”

London Bridge crosses the River Thames between central London and the South London neighborhood known as Borough Market, which lies several hundred meters from the bridge itself.

Saturday’s incident came less than two weeks after the terror attack in Manchester, England, killed 23 people following a concert by American singer Ariana Grande. The pop star, who was badly shaken by the attack but uninjured, was scheduled to return to Manchester Sunday to perform a benefit concert for victims of the suicide attack and their families.
(Source: VOA)