"Clarity" on Greece's Debt Still Not that Clear: The Economist Conference (Videos) 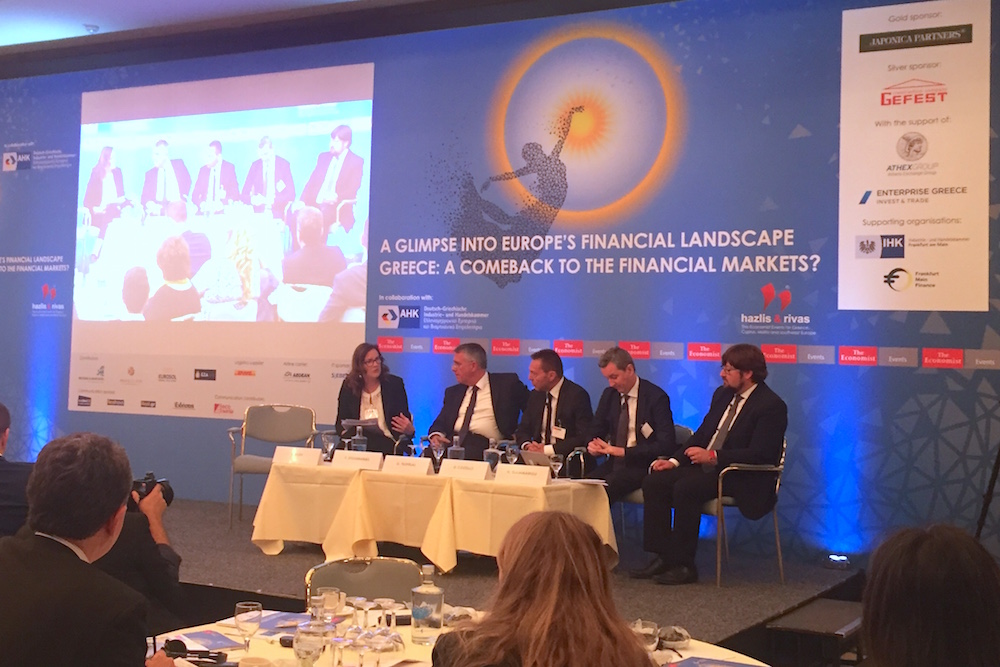 Representatives of the Greek government, the Institutions and private investors all agreed that clarity is essential for Greece’s economic recovery; however the term seems to be having different meanings according to who is using it. The only thing that’s clear is that Greeks will continue to suffer unless politicians in and out of Greece decide to put aside their personal agendas and seriously decide to tackle the Greek debt issue.
The need to lift uncertainty over Greek debt sustainability is necessary for Greece to enter the European Central Bank quantitative easing program, said Benoit Coeure, member of the Executive Board of ECB on Wednesday at the Economist conference on Greece held in Frankfurt. He stressed the need to lift the uncertainty over the viability of the Greek economy in order to restore confidence in the markets.
“Clarity over the debt measures is also a prerequisite for a possible participation of the Greek bonds in ECB’s quantitative easing program,” the ECB board member said.

“We are sorry that the debt relief measures were not defined at the last Eurogroup meeting. Deliberations are in progress, but I believe that it is important to reach an agreement at the Eurogroup meeting on June 15,” he added.


The Greek minister – who also asked for clarity from the Institutions’ part- said he doesn’t know how many measures Greece needs to take in order to make the debt sustainable. To that Coeure replied that the debate is no longer about Greece but about eurozone member states, underlining that the ECB must be sure about the sustainability of the Greek debt before it can integrate Greece into the quantitative easing program.
“We need to know what measures the euro-area member states intend to take,” Coeure said, stressing that the International Monetary Fund debt sustainability analysis would be an important element, but the ECB would do its own analysis in complete independence.
Responding to a question as to whether the German government in the pre-election period “can withstand” the promise to alleviate debt in Greece, he underlined that any delays “will cost more money” to taxpayers. “There is no reason to keep this pending. It’s time to make decisions and make the difference,” Coeure said.
Bank of Greece chief: Debt settlement prerequisite for economic recovery
Greece has implemented many painful reforms in order to reach the path of economic recovery, Bank of Greece governor Yiannis Stournaras said.
“It is a unique progress without precedent in Europe and OECD,” he said noting however, that many things remain to be done and that the high debt and the high unemployment rate are problems that hamper Greek economy.
In his speech that mostly focused on Greece’s return to the markets, Stournaras underlined the need for the debt settlement as a prerequisite for the recovery.
He presented settlement proposals based on the 3.5% primary surplus target until 2020 and then reduced to 2.0%. According to this proposal which aims to render the debt sustainable, measures should be taken such as the suspension of the interest rate payments, the extension of loan maturity and the return of the European banks’ profits from the Greek bonds.
As he noted, this is the least the Greek debt needs to become sustainable. Concluding, Stournaras explained that facilitating loan interest payment is a much more effective method for debt reduction than the increase of primary surpluses.
Paul Kazarian: Calculation of Greek debt is wrong
American investor Paul Kazarian, who has invested in Greece’s debt, said that the IMF calculation of Greece’s debt at 316 billion euros is misleading because the figure derives after six different restructures. He called that a “political” figure. The real debt, Kazarian argued, is 116 billion or at the most 204 billion euros. The Japonica founder pointed out that Greece’s debt is much lower than other countries because no other country had its debt restructured six times.

Kazarian said that Greek government is wrong in perpetuating the demand for debt relief. “Continuing to ask for debt relief, you are perpetuating your debt malaise,” the Japonica founder said addressing the Greek officials. “Once you calculate your debt correctly, that’s the first good step,” he added.
Kazarian advised Greece to follow the international standards in order to build trust and confidence in the markets. He said that the talk about the debt is “political fiction.” “Ditch the political fiction, which is clearly destructive, take the international standards and defend the country,” the American investor said.
Governor Stournaras reacts to Kazarian’s Greek Debt Numbers:

BoG Gobernor Stournaras dismissed Paul Kazarian’s suggestions on the Greek debt because “no countries use it.”
However, accordibg to professor of Economics Nikos Antonakakis at Webster University, “the International Public Sector Accounting Standards (IPSAS) -what Kazarian is suggesting- are a set of accounting standards issued by the IPSAS Board for use by public sector entities around the world in the preparation of financial statements.”
Antonakakis notes that those standards are not Kazarian’s but are based on International Financial Reporting Standards (IFRS) issued by the International Accounting Standards Board (IASB).
“Some governments that use IPSAS are New Zealand, the UK, Australia, Switzerland, the US, France and Israel,” concluded the Webser University Professor.
It is clear that clarity is still to be found among politicians that are looking to solve the Greek debt issue according to their personal political benefits and aspirations while Greeks have been suffering one of the greatest recessions of our time.