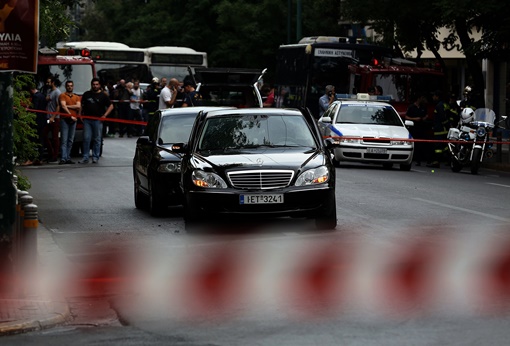 European Central Bank Governor Mario Draghi expressed his sadness and sympathy on behalf of himself and all of the staff at the bank for former prime minister Lucas Papademos, following the terrorist attack against him on Thursday, according to the Athens News Agency.
“We are saddened by the attack against our former colleague, Lucas Papademos, a brave public servant of Greece and Europe. I wish to say, on behalf of the Governing Council and staff of the ECB: our thoughts are with Lucas, his family and his colleagues,” Draghi said in a statement.
Papademos is still in Evangelismos Hospital after he underwent a minor operation on his thigh. He was injured in the thigh and abdomen when the parcel bomb exploded on his lap. According to an official statement from the hospital, he had a calm night after the operation and his health is in good condition.
The former prime minister will remain in the ICU for two days as a precaution, so that doctors can monitor his vital organs.
The two passengers in the car will be discharged from the hospital today after receiving treatment for their injuries.