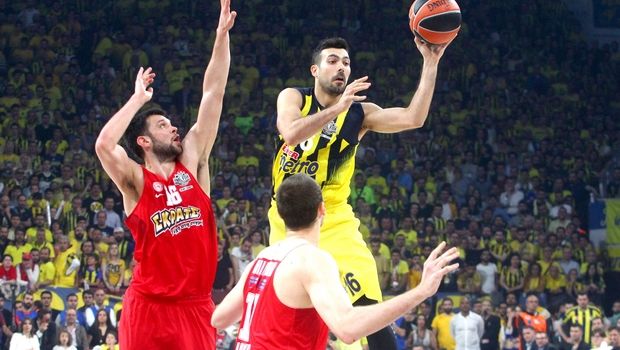 Fenerbahce was the big winner of the Euroleague Championship after beating Olympiacos 80-64 in Sinan Erdem Dome in Istanbul on Sunday night.
Fenerbahce came to the court as the absolute favorite against the Greek champions who travelled to Istanbul as the underdog of the Final Four. Ekpe Udoh’s impressive performance in defense, Bobby Dixon’s skillful playing and Bogdan Bogdanovic’s decisive three pointers led the Turkish team to victory.
On the contrary, the big guns of the Greek team (Vassilis Spanoulis, Giorgos Printezis and Costas Papanikolaou) were uncharacteristically silent. Khem Birch was the Reds’ best player (14 points) with Nikola Milutinov coming secod best in points (10).
For two-and-a-half quarters Olympiacos kept the score close, going to half-time trailing 39-35 at half-time. However in the third quarter, with the score at 46-44, Fenerbahce stepped on the gas managing a 68-50 lead.
The last quarter was easy for the Istanbul team, clinching their first Euroleague triumph for a Turkish team, with its coach, Zeljko Obradovic winning his ninth Euroleague crown.