GRNews
GreekReporter.comGreek NewsEconomy'Strong Push' for Comprehensive Deal by May 22 From G7, Say Eurozone...

'Strong Push' for Comprehensive Deal by May 22 From G7, Say Eurozone Sources 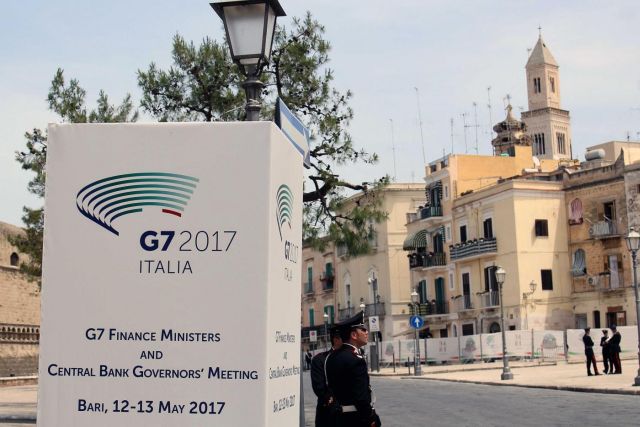 Discussions on Greece on the sidelines of a G7 finance ministers‘ meeting and central bankers in the Italian city of Bari on Friday concluded with a decision to give a “strong push” for a comprehensive agreement by May 22, when the Eurogroup will meet, that will include the debt issue, Eurozone officials told the Athens-Macedonian News Agency.
According to one official, all sides involved have the political will to achieve a deal and in the coming days they will discuss the language that will be used to specify the medium-term measures for Greece’s debt, based on the Eurogroup decision on May 2016. The same official said the aim is to strike the right balance that will abide by the IMF’s requirements and will not cross Berlin’s red line. The next step will be the Eurogroup Working Group (EWG) meeting of 15 May, where alternative scenarios on measures to alleviate Greek debt will be discussed.
According to other Eurozone sources, during the May 22 Eurogroup, ministers are expected to discuss the implementation of the prior actions by the Greek government and decide on the completion of the second review so that the next loan installment can be disbursed. The Eurozone countries and the IMF are expected to agree on the target for primary surpluses that Greece will have to achieve after 2018.
Thirdly, concerning debt, the Eurogroup wants to reach a decision on concrete relief measures that will satisfy the IMF to such an extent that it will be able to announce the same day that it will ask its governing council to approve a new program for Greece.
(source: ana-mpa)