Moscovici, Sapin See Solution for Greece's Debt Before May Eurogroup 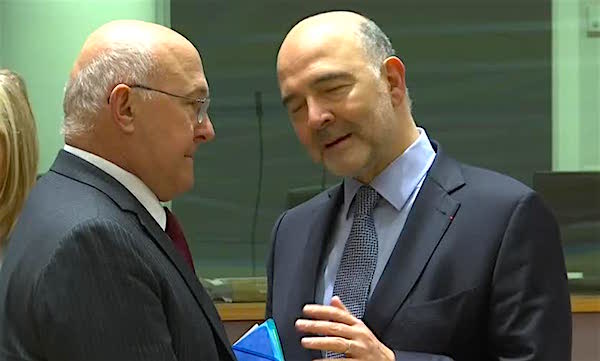 The ball is now in the court of Greece’s European partners, who have to keep their side of the bargain regarding debt relief, French Finance Minister Michel Sapin said on Friday, in a statement from the G7 Finance Ministers’ Meeting taking place in Bari.
“They must now implement what was necessary [in the first place]…In other words, in some way or another to relieve the debt burden on the Greek economy and its budget,” Sapin said, noting that all parties in the talks had expressed a desire to reach agreement before the Eurogroup on May 22.
European Commissioner for Economic and Financial Affairs Pierre Moscovici also expressed optimism that a deal will be found for Greece:
“I am confident the will is there and Greece will be able to turn the page on a too-long chapter of austerity and open a new chapter of growth and investment in a framework of stability,” he said. “After so many years of recession, the Greek people really need that.”
(source: ana-mpa)