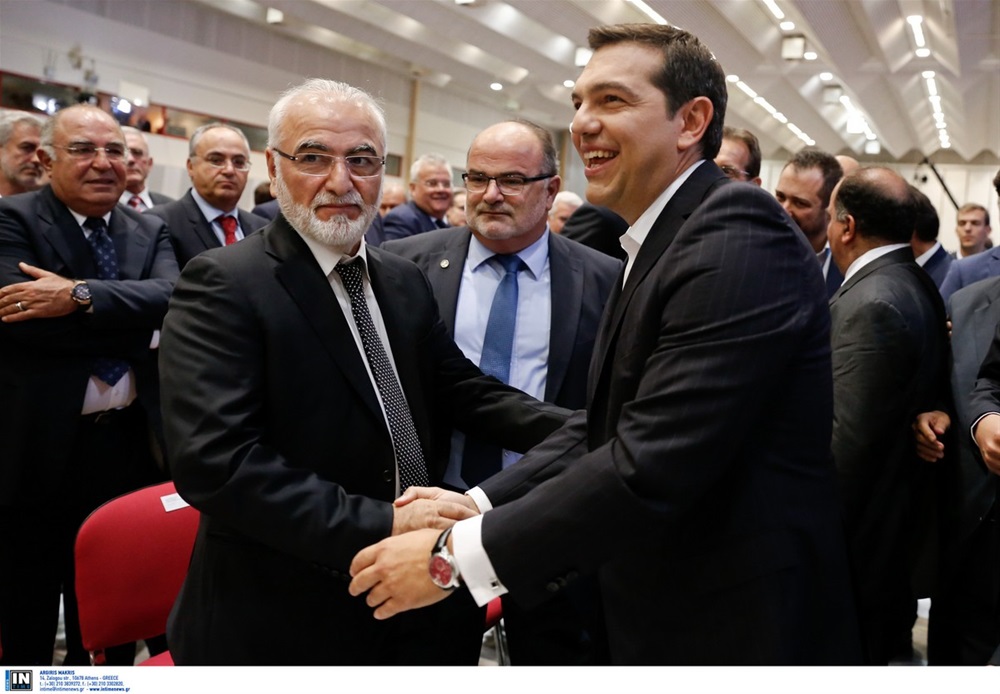 Businessman Ivan Savvidis praised Prime Minister Alexis Tsipras and likened him to Russian President Vladimir Putin, while slamming main opposition leader Kyriakos Mitsotakis.
In an interview to Proto Thema newspaper, the Greek-Russian businessman praised the prime minister for a confrontation he had with the opposition chief in Greek Parliament last week. He said that listening to Tsipras’ speech it reminded him of the strong leader that the Russian president is. He also said that the prime minister is the future of Greece.
Specifically, the two politicians confronted each other in parliament over a bill that the coalition government was trying to pass. The bill deals with the trade of contraband goods and respective fines. An article on the bill favors Savvidis because it practically erases a fine of 38 million euros that the businessman has to pay for SEKAP, a tobacco company he bought in 2013.
Opposition parties accused SYRIZA of bringing the bill to parliament claiming it is obvious that the particular article is drafted with the interests of Savvidis in mind. The bill passed with the votes of 149 of the 153 coalition MPs and 106 against. Savvidis praised the bill because, as he said, it does not benefit him alone but “thousands of investors” as well.
In the interview, the Greek Russian businessman said that the bill would lure more investors to Greece and it is investment-friendly. He then attacked Mitsotakis saying that his policies would chase away investments and that “he would never become prime minister.”
Savvidis further said that when he purchased SEKAP “under pressure” from the Antonis Samaras administration, he had no idea that the company had accumulated fines of 38 million euros after charges of contraband trade.
New Democracy: The Greek people will decide the future of Greece
“The future of the country will be decided by the Greek people and not by corrupt oligarchs,” was the New Democracy reply.
The whole official stetement issued by the conservative party reads as follows:
“The interview of Mr. Savvidis reveals the corrupt relation that is provocatively extended, with full responsibility of the Tsipras-Kammenos government. The scandalous amendment in the house has nothing to do with democracy, transparency or justice. There is no pluralism in television channels with ANEL executives, neither with those who admitted that they were the “hares” in the cancelled tender for TV licenses. The future of the country will be decided by the Greek people, not by the corrupt oligarchs. Let us not insult the dignity and democratic conscience of the Greeks people.”