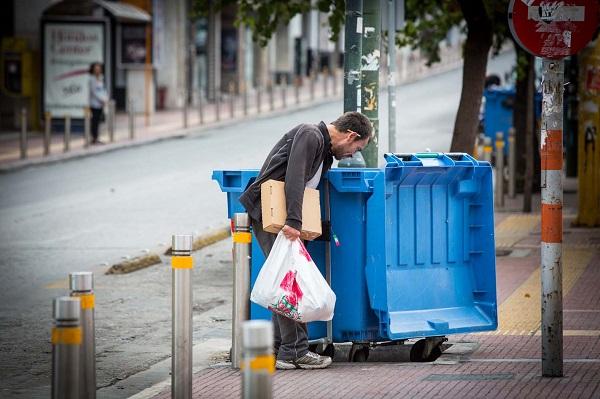 Almost 1.5 million Greeks live in extreme poverty, most of them unemployed and young, a recent study by the diaNEOsis non government organization says.
Specifically, the study says, 1,488,714 Greeks, most of them young and unemployed live in extreme poverty, meaning that they are deprived of basic food items, telephone service, clothes and vacations.
Extreme poverty has hit 68.5% of households with an unemployed head of the house and 45.5% of student households. Overall, in 2016, 13.6% of Greek people lived in extreme poverty.
“We wanted to focus on research on extreme poverty because the magnitude of relative poverty actually gives us limited information about citizens who have a real survival problem and their lives have not changed significantly with the crisis. We define extreme poverty as the inability of our fellow citizens to acquire a basket of necessary goods, the cost of which changes according to the number of household members, whether they are paying rent or mortgage and, of course, whether the family lives in urban, or rural area,” said Theodoros Georgakopoulos, diaNEOsis Content Director.
“What we find extremely interesting is the fact that extreme poverty accumulates overwhelmingly in the younger productive ages, which are also facing the highest unemployment rates. As for older people, for example those over 65, even low pensions seem to become a safety net against extreme poverty,” said Research Director Kyriakos Pierrakakis.

Filiki Eteria: The Group That Sparked the Greek War of Independence