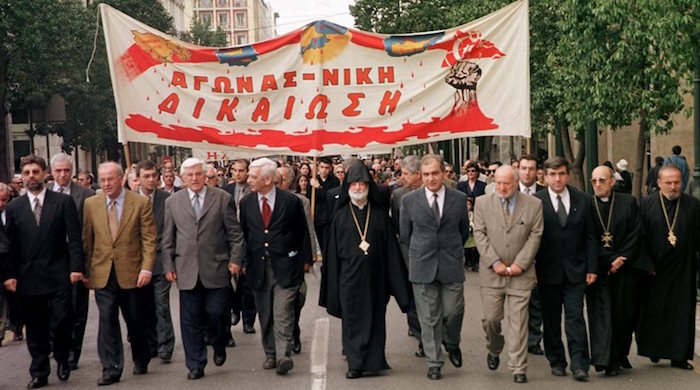 Hundreds of Armenians marched towards the Turkish embassy in Athens on Monday to commemorate the 102nd anniversary of the Armenian Genocide — the systematic extermination of 1.5 million Armenians by the Ottoman government carried out during and after World War I.
Young protesters waved a huge Armenian flag at the head of the march and held banners reading “Fight-Victory-Vindication.” This year the rally was under the auspices of Attica’s prefecture, with crowds gathering on Syntagma square in the afternoon and proceeded towards the Turkish embassy to deliver a protest statement to the ambassador.
Police kept protesters 300 meters away from the embassy and no delegation was allowed to approach the embassy building, so crowds remained on the junction of Vasilisis Sofias and Rigilis streets, intensifying their slogans against the Turkish government.
“The events of Armenians everywhere after the first century centered, not only on claiming recognition of the genocide, but on asking the Turkish government to restore its consequences,” the president of the Armenian National Committee Serko Kouyoumdjian told the Athens-Macedonian News Agency. “Furthermore, we claim damages for the human lives, our lands, our property,” he added.
Earlier, Armenians held a service at the Monument to the Victims of the Armenian Genocide in Nea Smyrni, where participants laid wreaths. This year marks the 30th anniversary of the recognition of the Armenian Genocide by the European Parliament in 1987.
(source: ana-mpa)