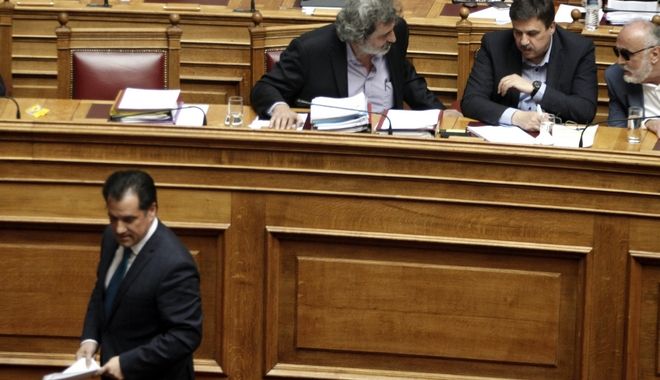 New Democracy MPs and SYRIZA ministers on Wednesday turned the Greek Parliament into an arena, accusing each other of corruption and clientelism in the health sector.
Deputy Health Minister Pavlos Polakis and former health minister Panagiotis Kouroumblis of the ruling party exchanged heated words with former New Democracy health minister Adonis Georgiadis and MP Nikos Dendias over alleged scandals, mismanagement and clientelism. The two sides accused each other of corrupt practices costing millions of euros to taxpayers, with some allegations turning to personal insults.
The House convened today to vote on a SYRIZA-ANEL proposal for a committee to investigate scandals in the health sector for the 1997-2014 period. The main opposition proposed a committee to investigate the same from 1996 until the present, as Kouroumblis had been general secretary of health with PASOK in the late 1990s. SYRIZA-ANEL turned down the New Democracy proposal.
According to parliament regulation, 120 votes from those present in the House are needed in order to establish an investigating committee. Given that the coalition has 153 votes and the opposition 147, it would be next to impossible for the New Democracy proposal to pass.
Georgiadis refused all accusations and said that an investigating committee is welcome. However, he said, there should be a committee to investigate the scandals of the current administration. The New Democracy MP said that justice found that the accusations of the deputy health minister that he had made 23 illegal hirings at KEELPNO when he was health minister were groundless.
Georgiadis also returned the accusations alleging that the health ministry paid 700,000 euros to a private security company for guarding KEELPNO for the January-February period.
Polakis retorted by saying that during the New Democracy administration pacemakers cost the National Health System 6,500 euros each while in Europe they cost 1,800 and that in the same period an AIDS test in Greece cost 50 euros and in Poland 8 euros. He also indirectly called Geogiadis a “parasite.”