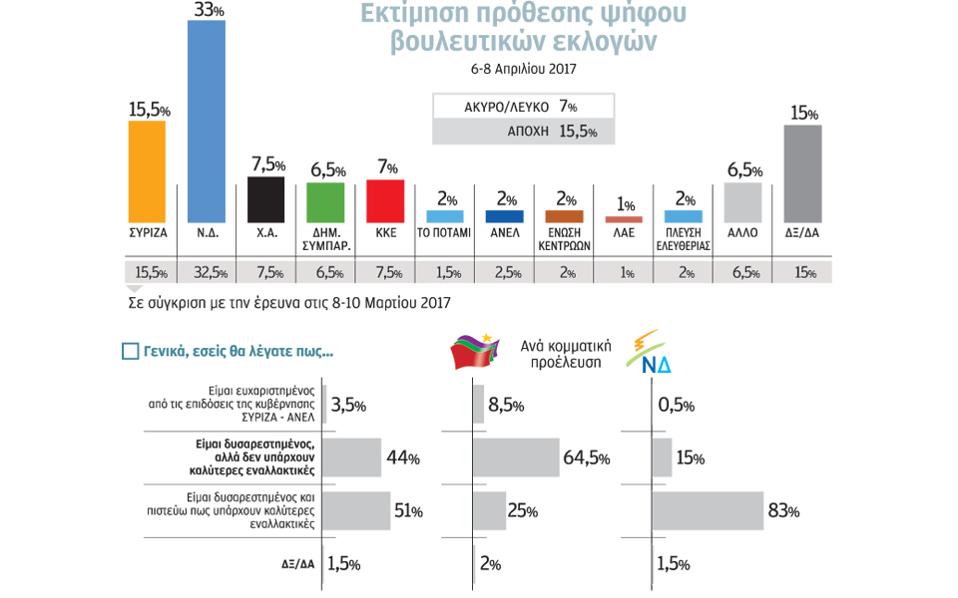 The gap between New Democracy and SYRIZA is widening in opinion polls as the latest one shows the conservative party leading by 17.5 percentage points.
In the poll conducted by University of Macedonia on behalf of Skai television, New Democracy leads the race on intention to vote with 33% with SYRIZA lagging behind at 15.5%. In March, the percentages for the two parties were 32.5 and 15.5 respectively.
Golden Dawn remains third party with 7.5% (7.5% in March), followed by the Greek Communist Pary (KKE) with 7% (same in March) and the Democratic Coalition (PASOK-DIMAR) with 6.5% (6.5% in March).
The three parties that follow, currently represented in the House, do not seem to make in the next Parliament if elections were held today, as they are below the 3% threshold of total vote. Specifically, To Potami, ANEL and the Centrists Union all got 2% (1.5%, 2.5% and 2% respectively in March),
Plefsi Eleftherias with 2% and Popular Unity with 1% follow in the survey, with 6 5% of respondents saying they would vote for “other parties” and a significant 15% of citizens replying that they remain undecided.
In the more specific question on the degree of satisfaction of the electorate from the government’s performance and whether there are better alternatives, only 3.5% of respondents said they are “happy with the performance of the SYRIZA-ANEL coalition” while 44% answered that “they are dissatisfied, but there are no better alternatives”, while there was a marginal majority (51 %) who replied that “there are better alternatives.”
Regarding the people who voted for SYRIZA in the previous election, 89.5% of them said they are disappointed by the government. However, only 25% of them said that there could be a better government, with 64.5% sayin that even though they are disgruntled by SYRIZA they don’t see a better alternative. Only 8.5% of SYRIZA voters said that they are satisfied by the government’s performance.
In the question what kind of government would be best for Greece at the moment, regardless of party affiliations, 20% would like to see a SYRIZA government or a coalition with SYRIZA as the major partner,  36% said they would like to have a New Democracy government or a coalition with New Democracy as major partner and 13% would like to see an all-party ecumenical government.