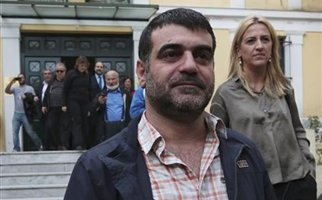 Journalist and publisher Costas Vaxevanis turned himself in to Greek police on Monday after Stavroula Nikolopoulou, spouse of BoG Governor Yannis Stournaras, filed a law suit against him on Monday over an article in his Documento newspaper, that accuses her of abusing her husband’s influence to secure state funding for medical conferences, as reported by ekathimerini.
Nikolopoulou stated the article is defamatory and asked for Vaxevanis’ arrest. “It demeans me as a professional when he alleges that I use my husband’s influence to acquire ‘jobs,'” she said.
The Documento article accused Stournaras of  “following the cheap method of ‘lecturing’ at conferences organized by his spouse and sponsored by pharmaceutical industries, without honoring his institutional role or keeping up appearances.”
In addition, it alleges that Stournaras’ family “has ties to” former defense minister Yannos Papantoniou who is under investigation for alleged kickbacks in connection with defense deals he signed.
Vaxevanis was released after brief detention at Kallithea police station. A prosecutor has ordered an investigation into the claims by Nikolopoulou.